Chubby Guy Sues Subway over ‘Footlong’ Sandwiches, But Not Because They Made Him Fat

For the record, Judicial Hellholes reporters carry no water for Subway, which has been unforgivably slow and clumsy in getting out in front of the public relations curve concerning lawsuits alleging that its “footlong” sandwiches aren’t long enough.  But if the sandwich chain doesn’t quickly begin to follow the aggressive Taco Bell playbook, established two years ago when it was falsely accused by an Alabama-based shyster of misrepresenting the ingredients of its taco meat, Subway likely will be swallowed up by other parasitic plaintiffs’ lawyers.

Criticisms of Subway’s strategy or lack thereof aside, the sandwich this reporter purchased as a curious, objective fact-finder from one of its stores here in Washington, D.C. today measured closer to 13 inches in length (see photo). 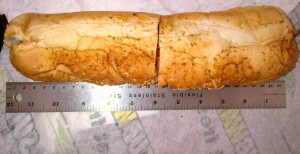 This evidence might lead reasonable, non-litigious people to believe that, since sub-roll baking is presumably a far less precise science than, say, docking spacecraft, Subway’s “footlong” rolls probably average pretty close to 12 inches.  And it’s quite likely that for every 11.5 inch roll someone can find, someone else can find a 12.5 inch roll.  Of course, the 12.5 inch rolls would probably draw lawsuits, too, by those claiming that Subway made them fat by foisting more calories on them than they expected.

And speaking of those who are less than svelte, the New Jersey man, Jason Leslie, who has

reportedly sued Subway in federal district court, appears in a New York Post photo to need another inch of bread like he needs a hole in the head.  At the fairly young age of just 32, Mr. Leslie looks to be significantly overweight with at least two discernible chins and counting.  He ought to be on Jenny Craig rather than routinely glomming down giant meatball subs.

But at least Mr. Leslie is honest enough to say he “feel[s] like an idiot,” and here the rest of us might agree.  For who, but an idiot, would so shamelessly waste fellow taxpayers’ dollars on finite court resources that could better be spent providing a day in court for those who’ve suffered a real injury or injustice?  If anything, Mr. Leslie ought to thank Subway for occasionally giving him a little less bread and calories than he thought he was getting.

Justice made fresh your way!