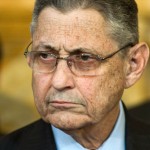 ilver facing federal corruption charges in connection with questionable asbestos litigation, the American Tort Reform Association today urged Albany lawmakers to “promptly kill an insurance litigation bill that would open yet another lucrative line of business for personal injury lawyers at the expense of New York consumers and jobseekers.”

ttorney Preet Bharara reportedly continues his probe of undue influence by special interests on state government,” observed ATRA president Tiger Joyce.  “So it’s hard to fathom why any legislators, at least those hoping to avoid suspicion themselves, would get within 10 miles of this latest tone-deaf gift to New York’s notorious lawsuit industry.”

Joyce referred to legislation, S.4049, which its sponsors claim is a needed amendment to state insurance law.  The amendment would suddenly give private-sector personal injury lawyers the right to bring so-called “bad faith” lawsuits against insurance companies that current law only allows the state’s Department of Financial Services to bring.

“New York law already provides several remedies for those injured by an insurer’s alleged unwillingness to settle a claim in accordance with a given policy’s promised coverage,” Joyce noted.  “And in the states that have enacted laws like the bill now pending in Albany, such bad faith claims have exploded, along with the premiums those states’ residents and businesses pay for insurance.

“The trial lawyers have made passage of S.4049 their top priority and claim the bill would prevent insurance companies from including bad faith jury verdicts and lawyers’ fees in losses for the purpose of calculating future premium increases,” explained Joyce.  “But only a tiny fraction of such cases will ever go to verdict because such laws effectively coerce insurers into settling claims – typically for much more than they’re worth.  This dynamic inevitably leads to higher premiums across a state.

“If New York lawmakers, especially those who’ve traditionally rejected new private rights of action, want to protect their constituents from higher insurance premiums and keep more job-creating businesses from fleeing the state, they should vote ‘no’ on this bill and otherwise resist future efforts by personal injury lawyers to expand civil liability,” concluded Joyce.

The American Tort Reform Association, based in Washington, D.C., is the only national organization dedicated exclusively to tort and liability reform through public education and the enactment of legislation.  Its members include nonprofit organizations and small and large companies, as well as trade, business and professional associations from the state and national level.  ATRA’s annual Judicial Hellholes report has frequently cited a number of Illinois counties among the least fair civil court jurisdictions in the country.