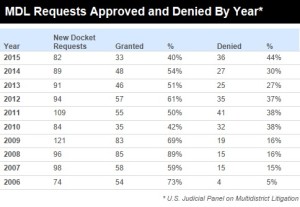 The NLJ’s 10 Years of MDL Requests

The 2015/2016 Judicial Hellholes report criticized the proliferation of multidistrict litigation and judge’s frequent inattention to their responsibility as “gatekeeper” to keep plaintiffs lawyers from using meritless cases to extort money from defendants.  JPML’s data show significant change since 2008 when the percentage of consolidation requests granted peaked at 89%.  That percentage dipped below 50% in 2015, to just 40%, for the first in the past decade.

The National Law Journal reports several factors the panel considers when evaluating consolidation requests: opposition to consolidation by one party, factual or procedural differences in the underlying cases, or a low number of cases to consolidate may all lead to denials.  Judicial Hellholes reporters also would like to think our criticism of MDL abuse, and that of others who se similar problems with MDLs, may also have influenced panel members for the better.