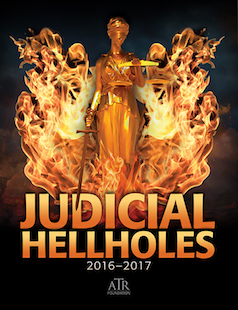 “This year, thanks to the Show Me Your Lawsuits State’s lax standard for expert testimony, ‘junk science’ is driving groundless lawsuits and monstrous verdicts that have made the Circuit Court for the City of St. Louis the #1 ranked Judicial Hellhole,” Joyce continued.  “The overwhelming majority of plaintiffs filing these suits are not from St. Louis, or even from Missouri. They travel from across the country to exploit a weak venue law as their lawyers spend heavily on television advertising that works to prejudice potential jurors against defendants.

“Across the country, New York City’s Asbestos Litigation (NYCAL) court, our #3 Judicial Hellhole,  has incredibly come to favor plaintiffs even more since the corruption conviction of former New York State Assembly Speaker Sheldon Silver, which led to the replacement of that court’s top judge.  But despite early signals that Justice Peter Moulton might carry out needed reforms, he has since shown his determination to ignore balanced procedural trends in asbestos litigation nationwide by reestablishing punitive damages and normalizing the consolidation of cases at the expense of defendants’ due process rights.

“Next on this year’s list comes Florida’s Supreme Court, from which flow liability-expanding decisions that ignore state lawmakers’ prerogatives and motivate South Florida’s plaintiffs’ bar to become even more aggressive.  Meanwhile, alliances between personal injury lawyers, shady medical clinics and various service providers continue to target insurance companies, and consumer protection lawsuits seem to serve no one but the lawyers who gin them up.

“It’s a similar story in New Jersey, where bad high court decisions have boosted consumer litigation and undermined arbitration agreements in seemingly lawful contracts, and a lax standard for expert testimony continues to attract many products liability plaintiffs from other states.

“Rounding out the latest Hellholes list are Louisiana, Newport News, Virginia, and Hidalgo County, Texas,” Joyce reported.  “The Pelican State’s trial-lawyer-turned-governor has hired rich political donors to run specious, multibillion-dollar litigation against the energy industry, while plaintiff-favoring interpretations of maritime law in the shipbuilding town along Virginia’s coast results in the nation’s highest win rate at trial for asbestos plaintiffs.  And at the southern tip of Texas, a flood of groundless, even fraudulent storm-damage lawsuits is prompting both judges and lawmakers to act.”

Joyce said the annual report’s marginally less severe “Watch List” jurisdictions this year include the supreme courts of Georgia, Montana and Pennsylvania, as well as courts in McLean County, Illinois, Philadelphia and Pittsburgh.  The Watch List also critically scrutinizes a federal judge’s handling of multidistrict litigation in the Northern District of Texas and, for what Joyce says “is, hopefully, the last time,” the rapidly reforming but once perennial Judicial Hellhole of West Virginia.

“Finally, this year’s ‘Closer Look’ examines litigation under the federal False Claims Act’s qui tam provision,” Joyce said.  “It allows private individuals to sue on behalf of the federal government and obtain a ‘bounty’ if successful. As a result of a series of legislative expansions and judicial rulings, this law, originally enacted to battle fraud in wartime contracting, has morphed into a trial lawyers’ dream.  Penalties available under the law have dramatically increased while it’s become much easier to bring these claims, and the promise of more federal funding has enticed states to enact similarly problematic laws.  And a recent decision by the U.S. Supreme Court, upholding a lower court award even though the whistleblower flagrantly violated the law’s 60-day seal requirement, is likely to encourage more questionable claims.”