Prompted by overtures from the politically powerful personal injury law firm of Peter Angelos, Maryland’s Senate Judicial Proceedings Committee conducted an October 2017 hearing for lawmakers on what plaintiffs’ lawyers claim is a “backlog of civil asbestos cases” in the Circuit Court for Baltimore City.

Those lawyers testified that there are roughly 30,000 pending non-mesothilioma asbestos cases in Baltimore that haven’t been scheduled for trials because the court lacks enough judges and other resources. And without trial dates, their argument went, defendants can’t be compelled to engage in serious settlement negotiations.

So the hearing served as political theater, with representatives of the Angelos firm bemoaning an underfunded and long-stalled status quo. But it was really just a dress rehearsal for next year’s legislative session when a more concerted effort to increase the court’s budget and requisite taxes is expected, along with a push to preserve old questionable claims.

Maryland’s 20-year statute of repose for improvements to real property was first enacted in 1970. It required any claim relating to an improvement to real property to accrue within 20 years after the improvement was made. e statute was amended in 1991 to include an exemption allowing claims against manufacturers in asbestos-related litigation, but the Maryland intermediate appellate court recently ruled that any prior asbestos related claim pertaining to an improvement to real property would have to accrue by July 1990 – 20 years a er the enactment of the original statute. e court ruled that the 1991 amendment could not revive older claims barred as of its effective date.

The case, Duffy v. CBS Corp., is currently on appeal to the state’s high court. But before the state’s high court can a firm a ruling that would result in dismissal of thousands of old claims, the Angelos firm may attempt to “clarify” the law by having plaintiff-friendly legislators declare that asbestos is not an improvement to real property. Should the legislature do the plaintiff bar’s bidding and enact such an amendment over a possible veto by Gov. Larry Hogan, the Angelos firm would be in for a nice payday and likely put still more pressure on the legislature to increase the court’s budget and requisite taxes. 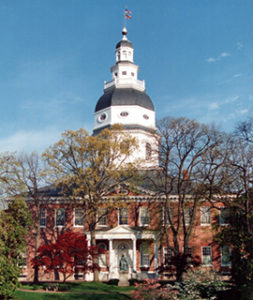 But Annapolis lawmakers already face a projected $250 million budget deficit for the coming fiscal year, and before they decide to raise taxes to provide more court funding for what defense counsel fear would become a “super highway” for bogus asbestos claims, they ought to reread a report they requested from Maryland’s Administrative Office of the Courts in 2014.

Skeptical of “merely increasing the number of judges” in Baltimore City without also giving judges better tools to weed out “non-meritorious cases,” the report indicates that roughly two-thirds of the asbestos claims pending in Baltimore City are represented by the Angelos firm. And fewer than 600 of all pending claims – less than 2% – allege an actual diagnosis of mesothelioma, the rare and fatal cancer often caused by significant exposure to asbestos.

Of the remaining claims, only 1 in 5 allege any kind of cancer at all, and defense counsel note that many non-mesothelioma plaintiffs have long histories of cigarette smoking. us it seems entirely fair to question the fundamental reliability of medical diagnoses underlying the overwhelming majority of non-malignant asbestos claims now clogging the docket.

Speaking of questionable diagnoses, the Baltimore Sun reported in 2013 when the Angelos firm last “[sought] to revive thousands of dormant asbestos cases,” that an investigation showed more than 1,500 claims to be duplicates. Of the remaining 11,383 claims scrutinized, nearly 70% involved diagnoses by one or more of the same five doctors, one of whom signed off on nearly 50% of those diagnoses, including an astounding 77 in just one day.

Even more remarkable was the identity of this super doctor, William Goldiner. He was and remains the team doctor for the Baltimore Orioles, which Peter Angelos purchased with the contingency-fee riches he won as Charm City’s most successful asbestos lawyer in the early 1990s.

Stunned by the Sun’s reporting, a Wall Street Journal editorial then urged Baltimore judges to “dig into the claims and see how many are bogus suits manufactured with the help of friendly doctors. … [S]uch discovery is the best way for the judiciary to stop the avalanche of fraudulent claims so legitimate victims can get their day in court.” And in fact, Baltimore City Circuit Court Administrative Judge W. Michel Pierson testified at the October hearing that such a process is now underway.

Beyond questionable diagnoses, another well-documented element of fraud that harms legitimate asbestos claimants is known as “double-dipping.” at’s when plaintiffs’ lawyers coach their clients to tell one story of alleged asbestos exposure for lawsuits against still-solvent defendants, and then entirely different stories when they also seek administrative payouts from trust funds established by previously bankrupted defendants. Such questionable claims deplete nite funds faster than they otherwise would be and therefore reduce future claimants’ chances of receiving just compensation.

This lack of transparency plaguing asbestos litigation and trust claims nationwide came up only tangentially in the October hearing. But if lawmakers intend to conduct additional briefings or more thorough hearings next year, plaintiffs’ lawyers should be obliged to answer some pointed questions. Meanwhile, before anyone even thinks about raising taxes to alleviate a court “backlog” comprising largely meritless claims, just so asbestos lawyers’ can expand their business model, state authorities with subpoena power should commit to investigating that business model.

Perhaps Maryland Attorney General Brian Frosh, whose website stresses his commitment to “safeguarding vulnerable populations,” will bravely step to the plate on behalf of legitimately diagnosed asbestos claimants. Their day in court shouldn’t be delayed by bogus cases, nor should trust funds be manipulatively depleted before the truly deserving can seek compensation.