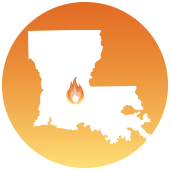 In a major development in the civil litigation targeting energy producers in Louisiana over their alleged damaging of the receding coastline there, a three-judge panel of the U.S. Circuit Court of Appeals for the Fifth Circuit today unanimously affirmed the dismissal of the very first such lawsuit — wholly concocted by plaintiffs’ lawyers — filed on behalf of the Board of Commissioners of the Southeast Louisiana Flood Protection Authority-East (SLFPA-E).

U.S. District Judge Nannette Jolivette Brown had earlier determined that the lawsuit involved enforcement of federal laws and thus should be heard in federal court, rather than returned to a state court as the flood protection authority wanted. The Fifth Circuit panel also unanimously affirmed that the authority had no right to sue under permits issued by the state or the U.S. Army Corps of Engineers which allowed the companies’ energy exploration or transportation activities in the first place.

The appeals court left no doubt that the SLFPA-E’s allegations are baseless and without merit, but the implications of this dismissal go even further because the suit served as a model for subsequent litigation that now includes five Louisiana coastal parishes and the State of Louisiana as plaintiffs.  Those suits are winding their way through state courts, but the Fifth Circuit ruling will certainly

So there’s no way to see this development as anything less than a big setback for trial lawyer-turned Governor John Bel Edwards and his high-rolling political patrons among the plaintiffs’ bar who are seeking to extort billions from the oil industry.  Judicial Hellholes readers will recall that, since coming into office in 2016, Gov. Edwards has looked to pressure major oil and gas companies into a universal settlement to the tune of tens of billions of dollars without actually having to prove the companies’ liability for coastal erosion, which in fact many environmentalists blame on the Corps of Engineers’ decades-long management of the levee system.