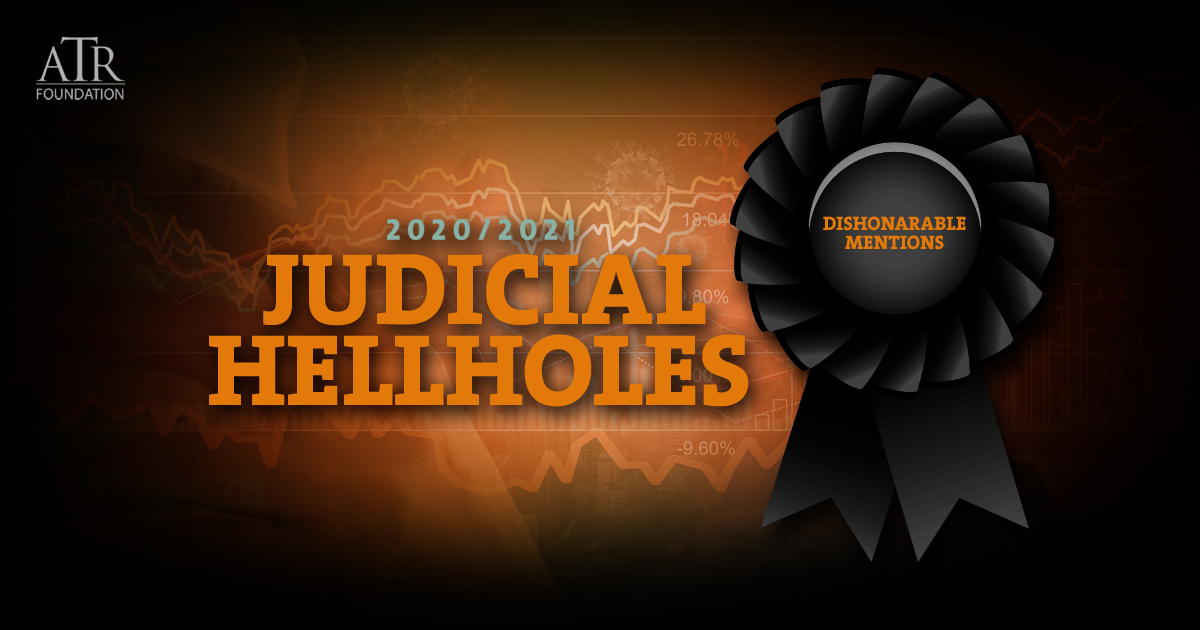 The country’s sue-happy states earned a dubious distinction they won’t want to display in the trophy case any time soon. Nine “Judicial Hellholes” were named today by the American Tort Reform Foundation (ATRF).

The Judicial Hellholes report digs into several concerning trends in the civil justice system. It explains the increase in artificially inflated damage amounts, called phantom damages, spurred by medical finance companies and trial lawyers issuing letters of protection to medical providers as a sort of “insurance” that they’ll be paid after a personal injury trial. The report also highlights the American Law Institute’s shift toward activism and the surge of COVID-19 lawsuits.

“COVID-19 impacted nearly every aspect of life this year and the civil justice system is certainly no exception,” Joyce said. “The need to protect businesses from frivolous COVID-19 lawsuits took center stage in a months-long battle in Congress, while state legislatures and governors worked to find solutions at the state level in the meantime.”

In spite of the pandemic, Judicial Hellholes pushed forward, allowing trial lawyers to continue abusing the civil justice system. Several state AGs took a more activist approach in their offices and expanded the applicability of public nuisance laws to envelop new societal issues. In Judicial Hellholes, they attempted to regulate various industries through litigation, abused laws meant to protect our most vulnerable by filing frivolous claims under the Americans with Disabilities Act, allowed outside parties to fund lawsuits, and awarded outrageous, high-dollar verdicts.

Excessive tort costs result in lost wages and lost jobs in Judicial Hellholes across the country. According to a report by the Perryman Group, No. 3 Judicial Hellhole California loses more than 240,000 jobs per year due to abusive litigation.

“It’s unfortunate that in these Judicial Hellholes, where lawsuit abuse is the norm, everyday citizens and small businesses are harmed because politicians and predatorial trial lawyers take advantage of a broken system,” Joyce said.

This year, the Philadelphia Court of Common Pleas tops the list for the second year in a row, now joined by the Supreme Court of Pennsylvania, together comprising the No. 1 Judicial Hellhole. Plaintiffs, or those who file lawsuits, flock to Philadelphia’s Court of Common Pleas due to its reputation for allowing out-of-state lawsuits and its record of issuing excessive verdicts in mass tort lawsuits.

“The Philadelphia Court of Common Pleas and the Supreme Court of Pennsylvania showed this year that no industry is safe as they look to expand liability for anyone who might have to defend themselves in court, including our essential health care industry,” Joyce said.

“Not only does lawsuit abuse drag down the overall economy, as we’ve seen this year with thousands of COVID-19-related lawsuits,” Joyce said, “But in the most sue-happy states, a family of four can pay a tort tax of more than $3,000 every year. That’s enough to pay for two kids’ college textbooks for all four years, and then some!”

ATRF also ranked a handful of states and courts to its “Watch List” that they will keep an eye on in the coming year due to their histories of abusive litigation or recent troubling developments:

Judicial Hellholes have civil justice climates that allow abuse and starkly contrast the rest of the nation. The report documents the year’s abuses in the civil justice system and in state legislative bodies. Judicial Hellholes are infamous among trial lawyers who flock to these jurisdictions to sue for more money and create new avenues to pursue litigation.

“It’s disappointing to see trial lawyers attempt to make a profit off of any national or public health crises,” Joyce said. “Everyone should have equal access to justice under the law and our courts should be balanced, not showing favoritism to any one party over another.”