Once a perennial Hellhole, West Virginia’s legal climate has vastly improved over the past three years thanks to numerous statutory reforms undertaken after Mountain State voters decided they’d had enough of trial lawyer-controlled lawmakers – and jobs-killing expansions of civil liability – and threw many of the bums out on Election Day 2014. In 2017 the legislature passed two more important reform bills: one that lowered the prejudgment interest rate, and another that limits products liability for innocent sellers. If not eventually struck down by the state’s still plaintiff-friendly high court, these and previously enacted reform statutes should continue to improve fairness and predictability in West Virginia’s civil courts.

While great progress has been made in the state, there is still work to be done. Several important legislative issues should be tackled as part of 2018’s legislative agenda, including:

• Allowing at trial the admission of evidence showing personal injury plaintiffs did not use their seatbelts in car accident cases,
• Limiting “phantom damages” so awards in personal injury cases reflect a plaintiff’s actual medical costs incurred, not those initially billed but never paid, and
• Venue reforms that require plaintiffs to file claims in the appropriate court while cracking down on forum-shopping.

Concern also persists in West Virginia about the fact that litigants do not have the same right to appellate review that is available in other states. And perhaps most importantly, lawmakers should seek to end the state’s uniquely troublesome practice of allowing medical monitoring claims. The West Virginia Supreme Court is the only court in the country that still permits cash awards to uninjured people who bring speculative medical monitoring claims.

Even as West Virginia legislators and governors make progress, however, the state’s Supreme Court of Appeals remains a concern and requires a watchful eye.

The high court is currently presented with the question of whether to adopt a novel plaintiffs’ bar theory, innovator liability. This case is a true litmus test for the court. Under innovator liability a brand name manufacturer can be held liable for injuries caused by a generic company’s product.

Subjecting companies engaged in innovation to liability that bears no relation to their products or revenues can discourage future investments in, for example, medicines or technologies that can improve and even save lives. Innovator liability also undermines the predictability and fairness that civil courts should provide all parties to litigation. And no notion of basic fairness can tolerate a product manufacturer being forced to serve as an insurer for injuries caused by a generic competitor, which is why the vast majority of state courts that have ruled on innovator liability have rejected it. West Virginia should, too.

Meanwhile, fairness also requires this report to note good news out of the Supreme Court of Appeals in 2017, including its decision in Martinez v. Asplundh Tree Expert. In this case, the court ruled that West Virginia’s statutory limit on punitive damages applies in cases tried after the law’s effective date, regardless of when the alleged conduct occurred or when the complaint was filed. The court correctly interpreted the legislature’s intent and resisted the urge to legislate from the bench. 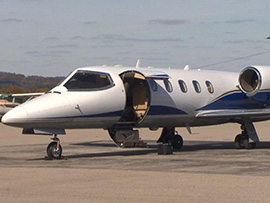 But picking up where a 2014 ABC News investigation entitled “Lear Jet Justice in West Virginia? A ‘Circus Masquerading as a Court’” left off, new and disturbing questions are being raised about one justice’s alleged conflicts of interest and campaign connections to wealthy trial lawyers.

Regular readers of this report will remember that a wealthy Mississippi plaintiffs’ lawyer named Michael Fuller bought a private jet from the husband of the Supreme Court of Appeals then-Chief Justice Robin Davis as a monstrous $91 million trial verdict against a West Virginia nursing home that Fuller had won was headed to the high court on appeal.

Fuller also orchestrated tens of thousands of dollars in questionable contributions for the chief justice’s ensuing reelection campaign, and she wrote the nursing home appeals decision that ultimately awarded him some $17 million in fees.

Davis’s husband, who sold the jet to Fuller, has insisted that nothing unethical or illegal took place. But court-watching activists in the state never bought that line and have more recently declared a subsequent state ethics investigation a whitewash. Where the sordid tale goes from here remains to be seen, but the activists used Freedom of Information Act requests to secure from state authorities thousands of documents and recordings and are reportedly combing through them for evidence that may yet prompt a more thorough inquiry.