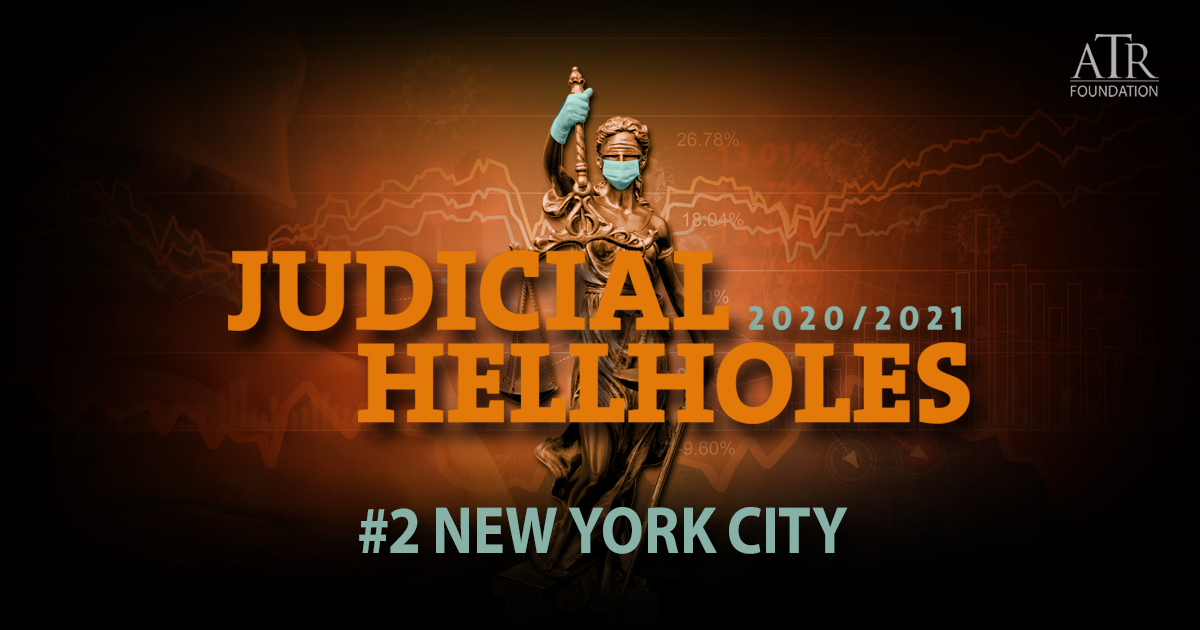 New York is experiencing a surge of “nuclear verdicts” in cases ranging from premise liability to medical malpractice. These are awards that usually include an amount for pain and suffering that dwarfs prior verdicts and, at levels in the tens of millions of dollars, hardly serve a compensatory purpose. Rather, they result from improper tactics that inflame jurors and mislead them to believe that amounts at these levels are ordinary and acceptable in litigation.

The New York  Law Journal points to how the rise in nuclear verdicts is “turning the New York court system on its head” and is “contributing to the demise of New York state.”

Last week, the Appellate Division, First Department awarded $20 million in pain-and-suffering damages after plaintiffs’ lawyers used an improper tactic known as “anchoring” to achieve a staggering verdict in the lower court.  Anchoring occurs during summation, when lawyers suggest an unreasonably large award to the jury and that number becomes the starting point in a juror’s mind.

In this case, Perez v. Live Nation, plaintiffs’ lawyers asked a jury to award $85 million in noneconomic damages to a worker who fell while assembling a booth for an event at Jones Beach. The jury obliged with a $85.75 million pain and suffering award on top of $13.5 million for medical care and lost wages.  The trial court lowered the noneconomic damage award to $40.6 million – an amount wildly beyond that which New York courts have permitted.  The Appellate Court lowered this award to $20 million.

Unlike some other states, New York law does not set a hard cap on awards for a person’s pain and suffering, which cannot be objectively measured. Instead, in New York, a verdict is “excessive or inadequate if it deviates materially from what would be reasonable compensation.” Courts look to prior awards for comparable injuries, sustained on appeal, for guidance. Prior to the recent dramatic rise in nuclear verdicts, only two New York appellate cases surpassed $10 million in noneconomic damages and this number became known as the state’s “de facto” limit.

In July 2020, the New York Law Journal published a three-part series titled, “Ahead to the Past: The Evolution of New Rules of Engagement in the Age of Social Inflation and Nuclear Verdicts.” In this piece, the authors discuss how plaintiffs’ attorneys employ a “how dare they defend” approach to litigation. This method allows for disproportionate compensation by fueling emotional outrage. They use specific language, such as “big corporations” and “hired guns” when speaking to the jury and encourage them to “send a message” to the defendants.

Tort law is meant to compensate, not to punish. As the authors observe, “Rather than provide just compensation, [nuclear verdicts] are thinly veiled efforts to punish the defendant that are nearly always awarded at the specific request of plaintiff’s counsel.”

These nuclear verdicts directly impact all New Yorkers, as it leads to higher insurance rates, higher consumer goods costs, and fewer jobs. Since public entities, such as public schools and the transit authority, are subject to these types of awards, nuclear verdicts also place taxpayers on the hook and place city services at risk.

ATRF will continue to monitor the case and provide updates on a potential appeal to the state’s High Court.