While Governor Ron DeSantis and the Florida Supreme Court consistently take affirmative steps to address litigation abuses in the Sunshine State, the Florida Legislature lags in these efforts. We applaud the legislature for enacting reforms during a special session to address the ongoing property insurance crisis in the state, but much work remains to be done if the state is to be removed once and for all from the Judicial Hellholes® report.

Lawsuit abuse and excessive tort costs wipe out billions of dollars of economic activity annually. Florida residents pay an annual “tort tax” of $812.52 per person and more than 173,000 jobs are lost each year, according to a recent study by The Perryman Group. If Florida enacted specific reforms targeting lawsuit abuse, the state would increase its gross product by over $17.66 billion.

RISING COST OF LITIGATION IN THE STATE 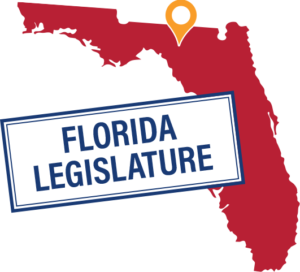 From 2010 to 2019, Florida produced the most nuclear verdicts (213) of any state in the country according to a recent study by the U.S. Chamber. The 213 verdicts totaled $35 billion. When the number of Florida’s nuclear verdicts is compared to population, the state fares even worse. Florida had, by far, the most nuclear verdicts per capita over the 10-year span. Florida barely edged out California (211) for the top spot; how- ever, the Sunshine State has almost half the population of the Golden State, making its No. 1 ranking even more concerning. Nearly two thirds of Florida’s nuclear verdicts in personal injury and wrongful death cases were in product liability and auto accident cases, which is far above the national average.

Two recent judgments levied against trucking companies exemplify the nuclear verdict risk for commercial drivers facing a personal injury lawsuit in Florida. In 2020, a jury delivered a $411 million verdict against Top Auto for a highway collision caused by one of the company’s truck drivers. In a similar case decided last year, another jury handed out a $1 billion verdict, inflated by $900 million in punitive damages.

The prevalence of nuclear verdicts in Florida can be attributed to a handful of issues including inflated medical damages, the abuse of letters of protection, and large punitive damages awards. According to the

Trial lawyers are well aware of the Florida courts reputation for nuclear verdicts, and as a result, spend hundreds of millions of dollars on advertising trying to find their next “goose that lays the golden egg.”

Plaintiffs’ lawyers in Florida have long abused what are known as “letters of protection” to inflate damages for medical care. Letters of protection are agreements between a person who needs medical care, his or her lawyer, and a healthcare provider under which the healthcare provider agrees to not seek to collect a fee for medical treatment through the patient’s insurance coverage, but instead wait to collect out of an expected settlement or judgment. Letters of protection can serve a legitimate purpose when a person is uninsured and unable to pay for medical expenses. However, some Florida lawyers recommend that their clients avoid using their insurance to cover medical expenses but rely on a letter of protection.

Under Florida law, at trial, jurors only hear evidence of the initially invoiced amount of medical expenses, which is essentially a “sticker price” that is often three or more times the amount that is ultimately accepted by the healthcare provider as full payment. After a verdict, Florida law requires judges to adjust the award

to reflect the actual amount of medical expenses paid and accepted, a process called a “set off.” Florida’s personal injury lawyers often use letters of protection to avoid this set off. By avoiding submission of treatment invoices for payment until after trial, there is no amount paid for a judge to set off the award.

In a prime example, a plaintiff in a case in Florida slipped and fell in a grocery store, injuring both knees, requiring identical surgeries on each knee. For the first knee surgery, the plaintiff used health insurance, and was billed $19,000 by the doctor but the total amount actually accepted as full payment was $3,400. However, the second knee surgery was performed under a “letter of protection,” resulting in $59,000 billed by and owed to the surgery center.

This type of abuse benefits no one but the lawyers and the medical clinics that may be in cohorts with them. The lawyers get to inflate the damage award and collect a larger contingency fee. The medical pro- vider gets paid a rate that is much higher than market value. The plaintiff, however, has these high rates taken from his or her share of the judgment, even if they would have been covered by insurance.

Mixed Bag from the Courts

The Florida Supreme Court issued a positive decision requiring accuracy in damages in Dial v. Calusa  Palms Master Ass’n (2022), highlighted later in the Points of Light section. The Court established that plaintiffs whose past medical expenses were paid by federal programs such as Medicare can only admit into evidence the amounts actually paid, not the fictitious amounts that no one is actually responsible to pay.

While the Florida Supreme Court once again issued a commonsense decision, trial courts across the state have not been so fair and balanced. For example, in September, Orange County Circuit Court Judge Kevin B. Weiss precluded a defense expert from testifying about reasonable and customary hospital bills at trial. The defense sought to use the expert’s testimony to demonstrate that the requested medical expenses did not conform to standard medical industry pricing.

The expert in question founded a medical billing service and has testified as a billing expert in numerous personal injury cases. Using her usual methodology, the expert prepared a report demonstrating the requested medical expenses were far greater than fees charged by other local hospitals for comparable treatment.

Despite having ample experience and hard evidence to support her opinion, Judge Weiss held that the expert had not demonstrated that “she can provide reliable, trustworthy testimony” under the standard for admission of expert testimony. Other Florida trial court judges also have prevented medical billing experts from exposing inflated charges.

Legislation can ensure that jurors receive accurate information on the actual value of medical expenses and prohibit abuse of letters of protection. The legislature also could place reasonable constraints on subjec- tive and unpredictable noneconomic damage awards, which are particularly important for preserving access to affordable medical care.

The cost of defending these lawsuits in Florida has increased exponentially over the past several years.

In 2016, insurers paid $1.5 billion defending these lawsuits and that number doubled to $3 billion in 2021. Unfortunately, the consumers are not reaping the benefits from this increase. 71% of the money goes to the plaintiffs’ attorneys while plaintiffs receive a mere 8 percent. The remaining 21 percent pays for the defense attorneys.

The property insurance crisis has a very real impact on Floridian property owners and insurers. As of August, five insurance companies had gone out of business in 2022, after 4 exited the market in 2021. This has led to a massive shortage of coverage at a time when Floridians impacted by Hurricane Ian are in desperate need. Florida Citizens, the state’s insurer of last resort, has seen a huge spike in policy holders as a result. They issued 760,000 policies at the end of 2021 and are projected to have issued over 1.2 million by the end of 2022.

Losses from recent Hurricane Ian are projected to hit $67 billion, with high-end estimates coming closer to $74 billion. Within two weeks of the storm, over 500,000 claims were filed in Florida cumulatively claiming an insured loss of over $5 billion. Sadly, less than 20 percent of the homes in the most-heavily impacted Florida counties had flood insurance due to the recently rising rates. While many will rely on Florida Citizens, it is underfunded and most likely won’t be able to cover the massive losses from Hurricane Ian.

Litigation abuses are some of the driving forces behind the rising costs of litigation. State leaders, including Governor DeSantis, have recognized the impact the state’s civil justice system is having on the property insurance crisis.

The state’s litigation environment has bred schemes arising out of Hurricanes Irma (2017) and Michael (2018). The current property insurance and housing crisis has been fueled by contractors exploiting assignment of benefit loopholes in Florida insurance law and a run of assignee-friendly court decisions. “Florida is the most volatile property insurance market in the country, and it is on the verge of collapse,” said Mark Friedlander, spokesman for the Insurance Information Institute.

The scheme involves a contractor approaching a homeowner and asking if he or she wants the contractor to complete a free inspection from storm damage. After the inspection, the contractor tells the homeowner there is roof damage, but not to worry because the contractor can get a new roof for free through insurance and the homeowner doesn’t have to do anything. This typically leads the homeowner to assign his or her rights over to the contractor, who then files an insurance claim and sues the insurer when it balks at paying for the new roof. The insurance companies tend to settle for much more than the original claim value to avoid paying attorneys’ fees, especially because of fee shifting and contingency fee multiplier that massively increase costs if a court finds against the insurer. As pointed out by Senator Jeff Brandes, “Ultimately the victim is every Floridian who is buying their neighbors’ roofs.”

PROPERTY INSURANCE LITIGATION REFORM. As part of a special session, the Florida Legislature passed and Governor DeSantis signed critical legislation to address the ongoing property insurance crisis in the state. SB 2D should work to reduce the frivolous litigation that is driving up insurance costs by: (1) reserving attorney fee multipliers – a mechanism by which an award of attorneys’ fees to plaintiffs can be doubled or tripled – for rare and exceptional circumstances; (2) confirming that before an insured can file a lawsuit alleging that an insurer acted in bad faith, the claimant must show that the insurer actually breached its agreement with the policyholder; and (3) preventing insureds from transferring their unilateral right to receive attorneys’ fees to contractors.

EXTENDING COVID-19 LIABILITY PROTECTIONS FOR HEALTH CARE PROVIDERS. In 2021, Florida provided essential COVID-19 liability protections to businesses, health care providers, and other entities. As originally enacted, the protections for health care providers were slated to end on March 30, 2022. The Florida Legislature acted quickly to ensure that hospitals, nursing homes, and physicians can focus on providing necessary health care without the constant fear of frivolous COVID-19 related lawsuits, passing SB 7014, which extends those protections for an additional 14 months. Governor DeSantis signed the legislation into law on February 25, 2022.