Virginia generally enjoys a reputation for having a fair legal climate, but that cannot be said for asbestos 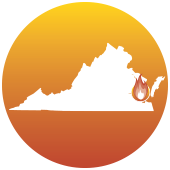 cases in the Circuit Court for the City of Newport News. Newport News judges routinely issue legal and evidentiary rulings that lower the bar for plaintiffs while tying defendants’ hands. These rulings have helped plaintiffs achieve the nation’s highest win rate at trial, 85%, a fact proudly acknowledged by local personal injury lawyers. Furthermore, multimillion-dollar verdicts are common against the few defendants willing to go to trial in a place where the deck seems plainly stacked against them. Not surprisingly, this magnet court experienced over 500 asbestos filings from January 2013 through April 2015 – 7 of every 10 asbestos cases filed in all of Virginia.

The instruction Newport News judges give to juries on causation is an example of the imbalance that occurs in that jurisdiction and a key reason that asbestos plaintiffs do well there. Ship repair cases such as those in Newport News are generally governed by maritime law, which requires a plaintiff to show that exposure to the defendant’s product was a “substantial factor” in causing the plaintiff’s harm. In Newport News, however, juries are told that any exposure qualities as long as it “was not an imaginary or possible factor or having only an insignificant connection with the harm.” Decisions in other jurisdictions make clear that Newport News is outside the mainstream in defining “substantial factor” exposure to be any exposure that was not imaginary. 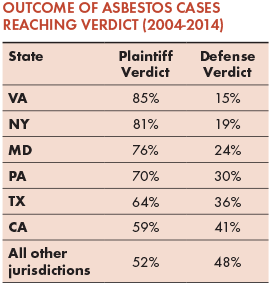 Only if a Newport News defendant can prove that the plaintiff’s disease was “solely caused” by exposure to another’s product(s) can a defendant escape joint liability for a multimil- lion-dollar verdict. But that task is made all but impossible by virtually insurmountable evidentiary burdens and inequitable rulings that favor plaintiffs.

For example, as the science of asbestos disease has evolved, it is now known that some forms of asbestos are much more potent than others. Many of today’s defendants sold products that were encapsulated and contained the least potent type of asbestos (chrysotile), rather than the far more toxic and friable amphibole asbestos found in thermal insulation. Newport News defendants are allowed to o er testimony about the general di erences in potency between gaskets and pipe covering, but are not permitted to quantify the di erence to make it real to the jury. Defendants are also categorically prohibited from presenting dose reconstruction evidence to show that their low-dose products were not dangerous, so no warning was required. To justify this patently unfair exclusion, Newport News judges rely on Virginia case law that excludes the opinions of car accident reconstruction experts, a very different situation.

There do not appear to be jurisdictions outside of Newport News that consistently exclude all dose reconstruction evidence; instead, the admissibility of such evidence in other jurisdictions turns on its reliability. What’s more, the ban on defendants’ introduction of dose reconstruction evidence seems entirely one-sided since Newport News judges allow frequent witness stand appearances by a particular plaintiffs’ expert who testifies about comparable “work practice studies.”

Because of the lax causation standard in Newport News and the limitations placed on asbestos defendants, the critical evidence often comes down to the testimony and documentations about the products and materials to which the plaintiff was allegedly exposed. Defendants rely upon third-party (often government) documents, as well as expert testimony, either to call into question whether their product was present at a plaintiff’s worksite or to prove the presence of alternative and more potent sources of exposure, such as amphibole-containing thermal insulation. In a typical case involving a former sailor in other juris- dictions, such evidence includes Navy ship drawings, speci cations, and other government documents presented by a well-qualified Navy expert to demonstrate the vast amount of asbestos-containing insulation throughout the vessel. In Newport News, however, the admissibility of this evidence has been subject to an absurdly exacting requirement of direct proof that these other asbestos-containing products were being used in the plaintiff’s workspace while the plaintiff was working in that compartment – proof that decades later simply does not exist.

Newport News is also an outlier in its categorical ban against the admissibility of Navy/employer knowledge of asbestos hazards. The circuit court prohibits such evidence for purposes of a “sophisticated purchaser” defense, although the issue is debatable as a matter of Virginia law. Other courts have allowed defendants to argue that the Navy was the sole cause of a harm (e.g., enlisted men had to use the products regardless). The information is also relevant to issues for which it should be admissible, such as the “state of the art.”

In addition, Newport News asbestos cases lack transparency with respect to alternative sources of exposure. The ATRF examined Newport News practices in light of In re Garlock Sealing Technologies, LLC a watershed opinion by a North Carolina federal bankruptcy judge. There, the court found that Garlock’s participation in the tort system “was infected by the manipulation of exposure evidence by plaintiffs and their lawyers.” The judge said that “it was a regular practice by many plaintiffs’ firms to delay filing trust claims for their clients so that the remaining tort system defendants would not have that information.” The “withholding of exposure evidence by plaintiffs and their lawyers was significant and had the effect of unfairly inflating the recoveries against Garlock.” Publicly available data indicate that millions of dollars of asbestos bankruptcy trust payments have been recovered post-verdict by asbestos plaintiffs in Newport News.