The Pelican State once again appears on this year’s Judicial Hellholes list largely due to former plaintiffs’ attorney and now governor, John Bel Edwards’ (D) aggressive litigation agenda and propensity for hiring campaign donors to manage litigation on behalf of the state.

The total current impact of excessive tort costs on the Louisiana economy amounts to estimated losses of $1.1 billion in annual direct costs and about 15,556 jobs are lost when dynamic effects are considered.

USE OF PRIVATE LAWYERS TO SHAKE-DOWN ENERGY COMPANIES 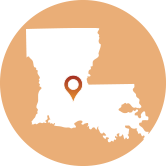 It began shortly after Edwards took office in 2016. He issued an ultimatum to the state’s oil and gas industry, either spend billions of dollars on restoring the eroding coast line or face a drawn-out, costly legal battle. This attempted shake-down failed and the two sides have been tied up in litigation ever since.

When the oil and gas industry refused to comply with Edwards’ demands, he strong-armed six local parishes to file more than 40 lawsuits targeting major providers of oil and gas jobs in Louisiana.

Despite resolving some of its budget issues, the state budget remains in a precarious situation. Rather than considering raising taxes permanently or further reducing public spending, Governor Edwards is targeting the energy industry. The only problem is, it has become quite clear that the oil and gas industry is not going to cower to his bullying tactics and give him the settlement he so desperately needs to balance his budget. Under Governor Edwards’ leadership, Louisiana posted the worst economic performance in the country in 2017. It was one of only three states in which the economy actually shrank.

Recent research conducted by Louisiana State University’s Center for Energy Studies found that the benefits of drilling outweighed the costs and environmental risks. According to an article in the Wall Street Journal, the oil and gas industry employs about 5% of the state’s workforce, contributes about 10% of aggregated payroll, and accounts for 10% to 15% of tax revenue. The industry has generated billions of dollars in royalty payments to landowners and has provided thousands of high-wage jobs to generations of Louisiana citizens. The continued litigation onslaught is only going to hurt those numbers and drive the oil and gas companies to do business elsewhere. As the Washington Examiner put it, “that prosperity is under threat, not from the federal government or even low oil prices, but from Louisiana’s own governor, his trial lawyer donors, and the abuse of the legal system.”

The other breakdown in Edwards’ case is that oil and gas exploration is not solely to blame for the coastal erosion that is occurring in the state. Other causes such as changes in the Mississippi River and levying of the river by the U.S. Army Corps of Engineers have played a role in causing the land erosion.

Regardless of these facts, Governor Edwards continues to target the industry and his trial lawyer friends
are the true benefactors. The law firm that Edwards chose to lead the efforts on a contingency-fee basis, Talbot, Carmouche & Marcello, also happened to raise $2 million for a super PAC supporting Edwards’ 2016 gubernatorial campaign. The same law firm also donated $10,500 to reelect state district court judge Michael Clement, who just happens to be the judge who will hear several of these cases in Plaquemines Parish in 2019. Judge Clement will face reelection in 2020.

Plaquemines is among the six parishes that have filed suit against the oil and gas companies, and was expected to be the first to go to trial in the spring of 2019. Though some Plaquemines Parish Council members want to “bring more energy-industry” jobs back to the Parish, others (like Parish President Amos Cormier) want to use potential revenue from the litigation to rebuild the land it lost. A 2018 resolution to “cease and desist” from all activities related to the lawsuits ultimately failed before the Plaquemines Parish Council. Though the measure received a 4—3 vote, a five-member majority vote is required for Council passage.

These lawyers are fighting tooth and nail to prevent these cases from being removed to federal court—where judges are not running for reelection and cannot be prejudiced by special interests. The U.S. Supreme Court dealt a blow to the plaintiffs when it denied a petition for certiorari in the energy lawsuit brought by the Southeast Louisiana Flood Protection Authority (SLFPA). By denying review, a federal district court’s dismissal of a lawsuit filed by SLFPA, affirmed by the Fifth Circuit, stands. The court found the SLFPA did not have standing to bring the lawsuit. Unfortunately for Edwards, his cases have no more merit than that one.

In January 2018, the Fifth Circuit also made it clear that these cases belong in federal court, not plaintiff-friendly Louisiana state courts. In that instance, 600 plaintiffs from at least 13 states sued the oil and gas industry in Louisiana civil district court in 2002. That was before Congress responded to such abuse by enacting the Class Action Fairness Act of 2005, which provided federal jurisdiction over “mass actions” in which the claims of 100 or more plaintiffs are consolidated for a joint trial. After additional plaintiffs joined the suit in 2013, the Fifth Circuit ruled that a federal district court could decide the case. On June 8, 2018, the Fifth Circuit refused to revisit its decision, denying the plaintiffs’ motion for a rehearing, meaning the case will proceed in federal court.

Coastal lawsuits are not the only litigation that Edwards has attempted to hire his campaign donors to manage, he also contracted with plaintiffs’ firms to represent the state in its opioid litigation. Governor Edwards hired James Garner’s firm, Sher Garner Cahill Richter Klein & Hilbert to represent the Department of Health in the opioid litigation. This firm raised tens of thousands of dollars for Edwards’ transition team in 2016.

The governor’s plans to repay his funders through the opioid litigation ultimately were derailed by Attorney General Jeff Landry, who filed a motion in October of 2017 to take control of the litigation and expand it to cover more agencies. Landry hired prominent plaintiffs’ lawyer and former attorney general of Mississippi, Mike Moore, to represent the state in the litigation. The oft-feuding AG and governor reached an agreement prior to a court hearing under which the Attorney General’s office will pursue the claims and take primary responsibility for the litigation.

Practically every governmental entity in Louisiana — mayors, sheriffs, parish presidents, police juries, district attorneys, cities, state agencies and the like — are hiring outside plaintiffs’ attorneys and joining the “national stampede to file civil lawsuits” alleging that companies that make the pain medications should shoulder medical and law enforcement costs that result from opioid addiction.

The opioid epidemic is a serious public health crisis both nationally and in Louisiana specifically. Louisiana has ranked among the top ten states for opioid prescriptions on a per capita basis over the last few years and the state has spent $677 million since 2007 on treatments for opioid abuse.

This growing problem needs to be addressed by elected policymakers, the expert regulators they appoint, the medical and scientific communities, and law enforcement. These groups must work cooperatively to advance public health and safety and ensure that these interests are not compromised by contingency-fee lawyers who are driven by profit.

Billions of dollars are at stake, and as Pete Adams, executive director of the Louisiana District Attorneys Association stated, “In addition to the seriousness of the issue, everybody is looking to get any dollars they can get.” The plaintiffs’ attorneys hired by Louisiana leadership stand to gain millions of dollars of any state recovery. As a result, their incentive is to maximize their fees irrespective of the public interest.

“[T]hat prosperity is under threat, not from the federal government or even low oil prices, but from Louisiana’s own governor, his trial lawyer donors, and the abuse of the legal system.”

For the fourth straight year, Louisiana residents saw their auto premiums increase, and in some cases, by double digits. According to the State Property Casualty Commission, Louisiana is the second most expensive state for auto insurance in the country.

Most Louisiana drivers are uninsured or underinsured (about 55%), encouraging drivers to turn to the court system to get larger payouts when an accident occurs. To compensate for this onslaught of lawsuits, Louisianans are forced to pay higher premiums. Plaintiffs’ lawyers are working behind the scenes to drive up the costs of even the most minor of fender benders, leading insurance companies to have no choice but to increase rates – or in the case of some companies, to leave the state.

The Commission, in addition to blaming overzealous trial lawyers, points to the state’s lack of tort reform as a reason for these rate increases. One reform bill introduced in 2018 that failed in committee would have made evidence that a person was not wearing a seatbelt at the time of an accident admissible in court. Under current Louisiana law, the jury is not allowed to consider this highly relevant evidence when determining damage awards. The bill passed the House, but died in the Senate. Several other legal reform bills stalled in the legislature, preserving the status quo in favor of the plaintiffs’ bar.

Louisiana continues to see a rising number of claims targeting small businesses for minor violations of the Americans with Disabilities Act (ADA). The filing of accessibility complaints in the state has spiked in recent years. As of June, Louisiana was among the top 10 states hosting these types of lawsuits in federal court in 2018, a distinction the state did not achieve in past years.

Typically targeting shopping centers and other small businesses, these claims often involve serial plaintiffs and are filed without giving notice to the establishment. Unfortunately, the cost of defending itself against even one frivolous lawsuit could be enough to force a small business owner to close its doors. This shameful approach of plaintiffs’ lawyers violates the spirit in which this important statute was written and does nothing to protect those the statute was intended to protect.

Louisiana is the only “civil law” state in the country, meaning that the state’s judges rely primarily on written codes to decide cases, as opposed to judges in common law states who look primarily to prior court decisions to determine the outcome of a lawsuit. The court’s ruling signals its inclination to expand liability even when not supported by the statutory law.

It is deeply troubling that it would break away from the written Civil Code and allow for punitive damages when applicable statutes do not expressly allow for them.