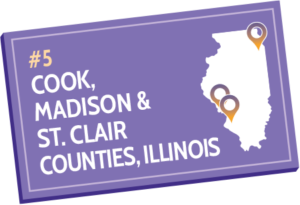 This trio of Illinois counties is a magnet for asbestos litigation and “no-injury” lawsuits stemming from the state’s Biometric Information Privacy Act. Making matters worse, the Illinois General Assembly is one of the most plaintiff-friendly legislatures in the country and Governor J.B. Pritzker (D) supports a liability-expanding agenda to the detriment of Illinois citizens. 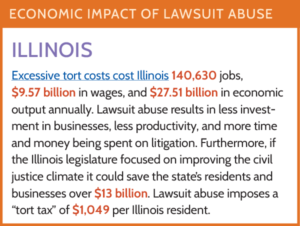 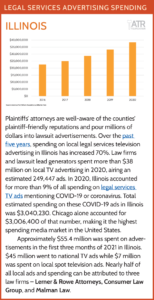 Despite an 11% decrease in the number of asbestos lawsuits filed in 2020 nationwide, both Madison and St. Clair counties experienced an increase in filings. Plaintiffs flock to these county courthouses due to their plaintiff-friendly reputations, low evidentiary standards, and judges’ willingness to allow meritless claims to survive.

While Madison and St. Clair counties are the plaintiffs’ bar’s most preferred jurisdictions in the nation for asbestos litigation, Cook County also makes an appearance in the Top 10. While in 2020, Cook County saw a 21.6% decrease in filings from 2019, it remained the eighth most popular jurisdiction for asbestos claims in the nation. In total, these three counties accounted for 46% of the nation’s asbestos claims in 2020. [2021 data not yet available when report was sent to press] 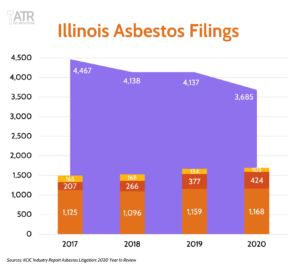 Illinois lawmakers enacted the Biometric Information Privacy Act (BIPA) in 2008, but it lied dormant until 2015 when plaintiffs’ lawyers discovered its business potential. BIPA provides a private right of action to a person whose fingerprint, voiceprint, or hand or facial scan, or similar information is collected, used, sold, disseminated, or stored in a manner that does not meet the law’s requirements. The number of BIPA class actions has surged. Between 2008 and 2018, there were 163 BIPA class action lawsuits filed. In 2019 alone, there were over 300 BIPA class actions filed – almost double the previous ten years combined.

The number of BIPA lawsuits surged after the Illinois Supreme Court, in a 2019 decision, ruled that a plaintiff does not need to show any harm to collect damages. Class action lawyers are cashing in by targeting businesses of all sizes that use iris scans, fingerprints and facial recognition data that are used increasingly to keep physical workplaces and sophisticated communications and cyber systems safe. These lawsuits do not allege any harm from collection of the information (which is encrypted) but seek substantial civil penalties along with attorneys’ fees and litigation costs.

A vast majority of ‘no-injury’ cases have been brought by employees against employers. For example, an Illinois precision machining company now faces a BIPA class action lawsuit in the Circuit Court of Cook County. The employees allege that the company, in which employees use fingerprint scans to clock in and out of work, violated the statute because the company never informed them in writing about its data collection practices.

The Illinois Supreme Court is hearing an appeal of an important case that will directly impact the future of the pending employee-employer BIPA cases. In McDonald v. Symphony Bronzeville Park LLC, the Court will decide whether BIPA claims are preempted by the Illinois Workers’ Compensation Act (IWCA). The defendant, a nursing home operator, argues that the exclusivity provisions of the Workers’ Compensation Act bar an employee’s claim for damages stemming from a requirement that she use her fingerprint to sign in and out of work. In that case, an Illinois appellate court distinguished statutory BIPA lawsuits, which do not require an injury, from the types of accidental work-related injury claims that must go through the workers’ compensation system. As one litigator pointed out, “The statute is largely shaping up to be, for all intents and purposes, largely a strict liability statute.” Illinois’ BIPA litigation has immense economic consequences for employers, and if liability continues to expand, it will ultimately drive even more businesses out of the state.

Statute of Limitations for BIPA Claims

In September 2021, an Illinois appellate court decided a question that dramatically affects the amount of civil penalties that plaintiffs’ lawyers can seek under BIPA: whether a one-year or five-year statute of limitations applies to BIPA claims. The longer the period, the longer plaintiffs’ lawyers can reach back in seeking civil penalties for each instance a company did not fully comply with the requirements of the Illinois statute. Unsurprisingly, the court ruled that in most instances, such as cases alleging retention, informed consent, and data safeguarding requirements, the state’s “catchall” five-year statute of limitations applies. Only in BIPA cases in which publication of a person’s information is involved does a one-year statute of limitations apply, the court ruled.

The powerful Illinois trial bar flexed its muscles during the 2021 legislative session, pushing the legislature to pursue its liability-expanding agenda. Sympathetic legislators used a variety of questionable tactics to successfully pass priority bills, including late-night amendments and last-minute substitutions.

Illinois S.B. 72, the Prejudgment Interest Act, was enacted in May 2021 and took effect on July 1. Prior to this act, Illinois did not provide prejudgment interest on damages for personal injury or wrongful death. Under the new law, prejudgment interest begins to accrue the day the action is filed at a rate of 6% annually. As a result, parties named in a lawsuit will have to weigh the increased risk of defending them- selves in court because, while the case is litigated, the potential award is rising.

This bill was presented as a “compromise” by its proponents after Governor J.B. Pritzker (D) vetoed the initial version, H.B. 3360, which called for a rate of 9%. This bill was set to die, but at the 11th hour, Senate President Don Harmon introduced a loaded amendment. It passed the House a few days later on January 13 around 3 a.m. While H.B. 3360 originally dealt with mortgages, the unrelated amendment created a law with far-reaching implications for the state’s civil justice system.

It is small businesses and their employees who will ultimately pay the price when astronomical litigation costs force businesses to raise prices across the board, simply to keep up. In turn, this will increase the “tort tax” burden on consumers, while simultaneously increasing payouts for trial lawyers. It opens defendants in civil cases to unnecessary financial exposure, and at a time when many businesses across the state already are struggling.

Another midnight-surprise passed by the Illinois Legislature is S.B. 2406. The bill, which will break up the state’s 20th Judicial Circuit Court, passed in the middle of the night on the last day of the legislative session without a public hearing. Proponents of the bill claimed that its purpose was to address a heavy caseload coming from the St. Clair County courthouse, but the real purpose seems to be to protect one of America’s premier personal injury destinations. A perennial Judicial Hellhole®, St. Clair County has long been infamous as a magnet for asbestos, class actions and no-injury lawsuits thanks to its plaintiff-friendly judiciary. The rest of the circuit surrounding St. Clair County has been trending away from the plaintiff- friendly approach, recognizing a need to protect local businesses from frivolous lawsuits. Because of St. Clair County’s lucrative history for the trial bar, the plaintiff-friendly legislature couldn’t risk letting the county become less attractive for lawsuits that fill the pockets of trial lawyers.

In addition to breaking up the 20th Judicial Circuit Court, the Democrat-controlled legislature also redrew the supreme court districts for the first time since 1964, with a party-line vote. Illinois’ seven Supreme Court justices are elected by five Supreme Court districts. Cook County elects three of the justices, while the other four districts each elect one justice.

While proponents in the legislature say the decision to redraw the map was in response to population changes, critics argue it is a ploy to keep the status quo in the state’s high court. This became a concern following Justice Thomas Kilbride’s unsuccessful retention campaign in 2020, making him the first state Supreme Court justice to lose a retention vote in Illinois history. The new map shrinks the Third District, Kilbride’s former district.

In February 2021, former Illinois Speaker of the House Michael Madigan stepped down from his legislative seat in the face of a federal investigation of political corruption. U.S. Attorney John Lausch charged ComEd, a utility company, with bribery for attempting to influence an unnamed Illinois legislator, fitting Madigan’s description, through the provision of “financial benefits.” The bribery scheme allegedly began in 2011 and lasted through 2019. Prosecutors estimate at least $150 million in “anticipated” legislative benefits were conferred. As part of a deferred prosecution agreement, ComEd has agreed to pay a $200 million fine. While Madigan has not been charged and has denied wrongdoing, he has been implicated as “Public Official A” in documents outlining the bribery scheme.

Madigan has raked in hundreds of thousands of dollars in campaign contributions over the years from the Illinois Trial Lawyers Association PAC and served as an effective roadblock to civil justice reforms. While his departure deals a blow to the plaintiffs’ bar, the new Speaker of the House, Emanuel “Chris” Welch, is a longtime Madigan ally who will likely continue to push plaintiff-friendly legislation.