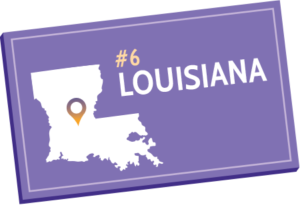 The optimism expressed in last year’s Judicial Hellholes® report that Louisiana’s litigation environment was moving in the right direction faded in 2021 with a veto of a much-needed bill to rein in deceptive lawsuit advertising practices while coastal litigation continued to drain state resources. Judicial misconduct appears to run rampant across the state and the investigation continues into a massive scheme to defraud commercial truckers and insurers in Louisiana courts. 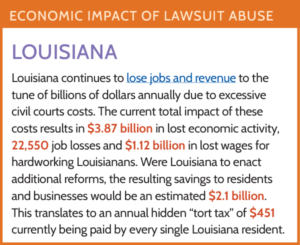 Additionally, Louisiana was one of only two states to receive an “F” Grade on R Street Policy’s national Insurance Regulation Report Card in 2020, citing the state’s extremely high auto loss ratio, among other factors.

A legislative priority, S.B. 43 by Senator Barrow Peacock, focused on limiting misleading lawsuit advertising practices and solicitations for legal services. This bill passed the legislature by a bi-partisan margin, but it was ultimately vetoed by Governor John Bel Edwards (D), a longtime ally of the plaintiffs’ bar. 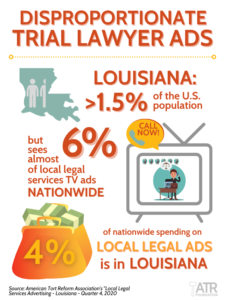 Louisiana accounts for a disproportionate amount of legal services TV ads and spending on those ads (4% of all spending and 5.6% of ads in one quarter) considering that the state makes up less than 1.5% of the nation’s population.

These types of misleading advertisements have literally frightened consumers into stopping the use of medicines prescribed by health care professionals without consulting a physician with harmful- some- times deadly – results. A 2019 FDA study found 66 reports of patients experiencing adverse effects from discontinuing use of blood thinner medication after viewing TV advertisements. Of those 66 reports, only 2% spoke to their medical professional, 33 experienced a stroke, 24 experienced other serious injuries, and seven patients died.

“This legislation was aimed at protecting patients and making sure medical professionals are able to give medical advice while lawyers give legal advice. Patients whose medication or medical devices are working for their conditions should not stop medical treatment because of a trial lawyer advertisement. They should seek medical advice before acting on unsubstantiated claims.” – Karen Eddlemon, Louisiana Coalition for Common Sense Executive Director

The Legislature entered an historic veto override session following the veto, one of 28 from Governor Edwards during the 2021 session, but failed in its efforts. During the override session, Senator Peacock read a letter he distributed to members of the Louisiana Supreme Court asking for guidance on the issue before he returned the bill to calendar without requesting a vote.

In his letter, Senator Peacock requested that the Louisiana Supreme Court further address the issue and report back to the Legislature, specifically seeking clarification regarding the party responsible for regulating advertising in Louisiana that does not fall under the court’s jurisdiction, such as non-attorney marketing firms known as lead generators or aggregators, or attorneys or firms outside the state. In response, the Court advised that it is unable to intervene in a matter between the Legislative and Executive branches. However, the Court does plan to organize a strategic planning discussion on lawyer advertising.

Coastal lawsuits targeting Louisiana’s critical energy industry stretch the law far beyond its intent, ignore critical facts and involve private lawyers in a space meant for democratically elected decision makers who are accountable to the public. Coastal lawsuits attempt to outsource the enforcement of state-issued permits to local governing authorities. Even though energy companies provide thousands of quality jobs for hard- working Louisianans and millions in tax dollars for state coffers, these baseless lawsuits continue to move forward under Governor Edwards and his high-paid trial attorney friends. The 43 cases filed by six coastal parishes and the City of New Orleans have dragged on since 2013, with no resolution in sight. The question of jurisdiction remains at issue.

In a recent development, the U.S. Court of Appeals for the Fifth Circuit partially reversed an earlier decision to keep lawsuits filed by Cameron and Plaquemines Parishes in state court. The Court agreed that no federal question existed; however, it remanded the cases back to federal district court to determine whether federal-officer jurisdiction applied. The decision was based on an expert report filed by one of the parishes containing what the court saw as a new theory of liability that might justify removal to federal court. The district court must decide if the companies were acting under the authority of a federal wartime agency. The lawsuits claim damages relating to the producers’ conduct carried out at the direction of the federal government during World War II. The parishes claim the producers should have followed certain “prudent practices,” but many of these supposed prudent practices would have directly conflicted with federal mandates.

The decision has implications far beyond these two parishes. At issue is whether the hundreds of oil companies named in the suit can be required to pay costs attributed to decades of coastal erosion and wet- lands losses.

Fueled by a climate of lawsuit abuse, the high cost of auto insurance has long plagued Louisiana families and businesses. Litigation plays a significant role in driving up insurance costs, leading to premium increases of 18.3 percent since 2015 for Louisiana drivers. Louisiana’s auto insurance rates are the highest in the country. Some insurance companies are no longer writing policies in the state, which reduces com- petition for consumers. Louisianans are feeling the effects on their pocketbooks, and some businesses are considering whether to relocate to less litigious states or close their doors.

Because of the highly litigious environment in Louisiana, insurers have had to pay for more labor to perform research and risk management. They also are building the risk of future litigation and settlements into their business/financial models. Increases in insurance costs vary, with low-risk carriers seeing an 8-10 percent increase and high-risk carriers seeing 35-40 percent rise annually.

The latest developments in the sprawling federal investigation, dubbed “Operation Sideswipe,” continue to expose the scope of these schemes to stage accidents with big rigs in the New Orleans area.

The investigation centers around staged “accidents” in 2016 and 2017. These accidents typically involved a driver (“the slammer”) intentionally colliding with a tractor trailer then another person entering the vehicle and feigning injury. Working with lawyers and doctors who may have been in on the scheme, the participants would then demand compensation for the bogus accident. Those involved ultimately secured settlements from insurance companies that provided coverage for the commercial carriers.

Seven more defendants were indicted for their alleged involvement in these schemes seeking to defraud trucking companies and their insurers, generating big payouts for themselves. The current total now stands at a whopping 40 defendants.

Louisiana law enforcement officials should be commended for pursuing the wrongdoers. It will deter individuals from engaging in similar behavior in the future because they know that they will be met with significant civil and criminal penalties if they do.

Louisiana has a longstanding reputation for its lack of transparency dealing with judicial misconduct. Scandals continue to bring attention to this issue, contributing to both the public and legislature losing patience with the judicial branch’s repeated promises to do better.

Changes to the Louisiana Supreme Court’s procedures adopted in 2020 are a step in the right direction, but do not do enough. Most notably, “confidentiality still remains during the Commission’s initial consideration of a complaint and during any investigation of a complaint,” the court announced. This means that the public will remain unaware of complaints filed against judges that do not lead to action by the Judiciary Commission.

Scandals continue to plague members of the judiciary as outlined below. Most notably, Louisiana Supreme Court Justice Jefferson Hughes, III admitted to committing judicial misconduct over a visit to the home of a Hammond political operative who alleged Justice Hughes offered him money to shift support to another candidate vying for an open seat on the Louisiana Supreme Court. Justice Hughes agreed to pay more than $2,000 to the state judicial commission to cover the costs of the investigation and was publicly censured for violating several judicial canons.

In a November hearing, the Judicial Commission of Louisiana investigated Louisiana district court judge’s alleged unethical conduct during a 2018 election campaign, a sign that the state is hopefully starting to address its lack of judicial transparency.

“Louisiana’s long-standing lack of judicial transparency is a big part of the problem that continually lands our state at or near the bottom of most national business climate rankings,” said Lana Sonnier Venable, executive director of Louisiana Lawsuit Abuse Watch. “Instances of alleged misconduct, like this one, are being more widely reported and continue to draw the ire of the public.”

Use of Mandatory Bar Association Dues for Lobbying

The appellate court did not yet eliminate the requirement for lawyers to join the bar, but it did say the bar association failed to properly disclose its activities, reversing a 2020 U.S. District Court dismissal of Boudreaux’s claims.

The Louisiana State Bar Association (LSBA) frequently engages in political or ideological initiatives completely unrelated to the practice of law, largely fighting against tort reform in the legislature. Since at least 2007, the LSBA has used mandatory membership dues to take a position on more than 500 bills filed in the state legislature.