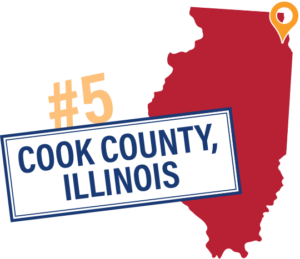 Cook County has become ground zero for “no-injury” lawsuits, mainly arising out of the state’s Biometric Information Privacy Act (BIPA). BIPA litigation has reached record highs with no signs of slowing down and the county has become a magnet for food and beverage litigation. The county also remains a preferred jurisdiction for asbestos litigation.

Unfortunately, the state’s General Assembly is one of the most plaintiff-friendly legislatures in the country and does very little to combat the pervasive liability-expanding agenda of the plaintiffs’ bar.

While previous reports have included Madison and St. Clair counties in Illinois’ Hellholes designation, the issues plaguing those counties have narrowed. They are the plaintiffs’ bar’s preferred jurisdictions for asbestos litigation, an issue discussed in the Dishonorable Mentions section. 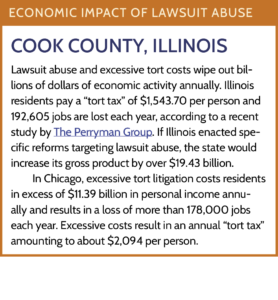 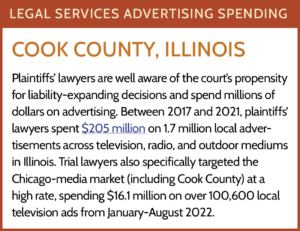 A recent U.S. Chamber study found that over a 10-year period (2010-19), Illinois ranked sixth among states for the number of nuclear verdicts ($10 million and more) in personal injury and wrongful death cases during this period and fourth for nuclear verdicts per capita. The Cook County Circuit Court hosted two-thirds of these nuclear verdicts.

Illinois lawmakers enacted the Biometric Information Privacy Act (BIPA) in 2008, but it lied dormant until 2015 when plaintiffs’ lawyers discovered its business potential. BIPA provides a private right of action to a person whose fingerprint, voiceprint, hand or facial scan, or similar information is collected, used, sold, disseminated, or stored in a manner that does not meet the law’s requirements. The number of BIPA class actions has surged. In 2021, at least 89 judicial opinions referring to BIPA were published, up from 62 in 2020 and over four times the number published in 2019.

In February 2022, in a highly anticipated opinion in a case that originated in Cook County, the Illinois Supreme Court held that BIPA injuries are not compensable under the state’s Workers’ Compensation Act because “[t]he personal and societal injuries caused by violating the Privacy Act’s prophylactic requirements are different in nature and scope from the physical and psychological work injuries that are compensable under the Compensation Act.”

Despite acknowledging that its decision in McDonald v. Symphony Bronzeville Park would contribute to a flood of lawsuits in Illinois courts, the justices found that the no-injury litigation was a problem “more appropriately addressed by the legislature.”

As with most BIPA cases, the employee did not claim to suffer any injury. The case rested entirely on the fact that the employer had not given written notice of biometric data collection for a fingerprint-operated timekeeping system.

In his special concurrence, Justice Michael Burke agreed that the injury was not compensable under the Workers’ Compensation Act because “quite simply, there is no injury.” He pointed out the irony of the majority’s decision and the main crux of the BIPA problem: the plaintiff originally pled that fear of her biometric information being compromised caused her “mental anguish,” however, she later dropped the mental anguish claim and proceeded only on the technical violation of BIPA. Therefore, under the majority’s analysis, the plaintiff only won “by denying the existence of an injury.”

Through the majority’s decision, the justices have further opened the gates to meritless “no-injury” lawsuits. As pointed out by partners at Manning Gross & Massenburg: “Put bluntly, the McDonald decision slams the door on any hope that a court would intervene to prevent a flood of these types of claims against employers.”

In yet another pivotal case originating in Cook County, the Illinois Supreme Court is poised to decide whether a BIPA claim accrues each time a business scans a person’s biometric information and each time it’s transmitted to a third party or only upon the first scan and first transmission.

Employees are suing their ex-employer, White Castle, for failing to obtain permission before collecting their fingerprints to use as log-in credentials for accessing work computers and collecting paychecks. White Castle filed a motion to dismiss, arguing that the statute of limitations on the claims had expired, as the injury – collecting the employee’s data without written consent – occurred in 2008.

The plaintiffs’ lawyers countered by arguing that it was a new BIPA violation each time the improperly collected BIPA data was utilized, and therefore, it was a violation every time an employee logged in to the system.

As pointed out in an amicus brief filed by the U.S. Chamber of Commerce, under the plaintiff’s rule “damages in these cases reach truly stratospheric levels” – collection and use of one employee’s bio- metric information could lead to thousands of distinct claims against the employer.

As noted by the Illinois Chamber of Commerce in its brief in the case, Tims v. Black Horse Carriers, additional time does not protect workers or promote BIPA compliance. “Allowing plaintiffs five years to bring Privacy Act claims will effectively delay compliance with the statute and risk compromising more individuals’ privacy rights.” A one- year statute of limitations would allow employers in the state to “focus on hiring employees, keeping stores and warehouses open, and staying in business, as opposed to litigating expensive class actions.”

The first ever BIPA case went to trial in 2022 and ended with a federal jury delivering a $228 million verdict in favor of the class of plaintiff truck drivers. The truck drivers filed the BIPA suit in the Circuit Court of Cook County, but the defendant, a national railroad company, removed the case to the Northern District

of Illinois. The suit claimed that the defendant required the truckers to scan their fingerprints to access the railyard and did not comply with the procedural requirements of BIPA.

After a weeklong trial, the jury found in favor of the truckers and assessed the maximum statutory penalty against the defendant despite the plaintiffs not suffering any injury or harm. The jury held the defendant liable for 45,600 violations of BIPA and found that each of these violations was willful or reckless, resulting in a $5,000 penalty per violation. The jury thus left the railroad company on the hook for $228 million in damages. The jury returned this maximum verdict after a brief period of deliberation – reports suggest less than an hour.

The landmark verdict demonstrates that Illinois juries are willing and able to assess massive statutory penalties for BIPA violations, even when the plaintiffs did not allege any actual injury. 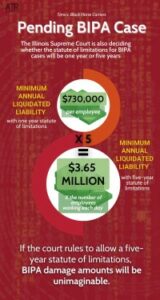 Recent BIPA settlements show the true profit motive for plaintiffs’ attorneys behind bringing these cases. In January 2022, Chicago Hyatt settled a BIPA class action for $1.08 million with class members recovering $865 per person and class counsel receiving over $430,000. The case was brought in Cook County by a hotel employee who clocked in and out of work using her fingerprint. She claimed no injury aside from the hotel’s failure to follow BIPA’s notice, consent, and record- keeping requirements.

In another 2022 settlement, a class of employees sued the producer and data server of biometric timekeeping devices bought by employers across the state. The company entered into a $15.3 million settlement that offered individual class members between $290 and $580. The attorneys representing the class took home over $5 million. The case was filed in Cook County Circuit Court but was later removed to federal court.

Illinois saw a 450 percent increase in consumer class actions targeting food and beverage products in 2021, rising from 8 suits in 2020 to 44 suits in 2021. Illinois rose from 5th (2020) to 3rd (2021) in hosting national food and beverage marketing claims. The vast majority of these cases are filed in federal court in the Northern District of Illinois, which includes Cook County.

This jump in lawsuits may stem from a prolific filer of no-injury consumer class actions, Spencer Sheehan, who appears to be more frequently filing lawsuits in Illinois after a string of defeats in New York’s federal courts.

Other consumer class actions have resulted in significant settlements in Illinois. This year, a settlement was reached between Fairlife Milk and class members over advertising statements indicating that dairy cows were treated with “the utmost care,” despite allegedly being subject to conditions typical for industrial dairy cattle. The parties agreed to settle for $21 million. Each claimant can receive a 25% refund of the purchase price of the milk up to $20 without receipts, while class counsel will receive $7 million in fees and over $95,000 for expenses.

“Put bluntly, the McDonald decision slams the door on any hope that a court would intervene to prevent a flood of these types of claims against employers.”

A FAVORABLE JURISDICTION FOR ASBESTOS LITIGATION

As asbestos claims continue to fall nationwide, the number of lawsuit filings in Cook County remained con- stant. Lawyers flock to Cook County due to their plaintiff-friendly reputations, low evidentiary standards, and judges’ willingness to allow meritless claims to survive. Cook County was ranked in the top-10 (#7) for 2021 asbestos lawsuit filings, representing an almost 10-percent increase over the previous year. In the first half of 2022, Cook County recorded a slight decrease in asbestos filings but remained a top-10 (#9) jurisdiction.