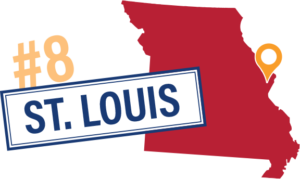 While the judges in St. Louis continued to ignore both state law and U.S. Supreme Court precedent and allowed junk science to fill their courtrooms, the Missouri legislature must continue to prioritize reforms to address the lawsuit abuse bogging down business in the state. The future success of the state is contingent on both branches of government addressing the work needed to ensure the state has a fair and balanced civil justice system. 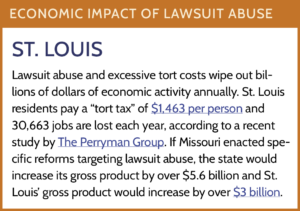 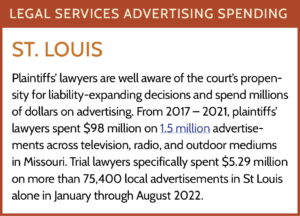 JUDGES REFUSE TO EXERCISE ROLE AS GATEKEEPER OVER EXPERT TESTIMONY

St. Louis, along with fellow Judicial Hellhole® California, is home to tens of thousands of lawsuits against Monsanto involving its Roundup® weedkiller. These lawsuits allege that the active ingredient in the product, glyphosate, causes non-Hodgkin lymphoma.

Despite the Missouri legislature requiring closer scrutiny of proposed expert testimony in 2017 by adopting a standard consistent with federal courts and most other state courts, St. Louis judges have allowed junk science in their courtrooms. Law firms across the country are flocking to St. Louis to file their lawsuits.

In August 2022, the first St. Louis County case involving three plaintiffs from Florida, Washington, and upstate New York went to trial. Ten of the 12 jurors in the St. Louis courtroom sided with Monsanto, even after hearing a month’s worth of unfounded science put forth by plaintiffs’ witnesses. Jurors on the opposite side of the state, in Jackson County (Kansas City), reached the same conclusion in a similar trial just three months earlier.

The St. Louis case fell apart under cross-examination as the expert witnesses proved less than credible. While this jury bailed out the system, it is unreasonable to expect juries to reach the proper resolution in the absence of a judge performing his or her responsibilities.

The LinkedIn resume of one plaintiffs’ witness, William Sawyer, advertised that he was a “board- certified toxicologist” — until he was confronted on the stand and forced to admit that he was unable to obtain certification from the American Board of Toxicology. Sawyer failed both of his attempts to pass the examination required to secure that important credential. Sawyer then turned to Robert O’Block, founder of the American College of Forensic Examiners, who supplied an appropriate diploma. In fact, O’Block was so willing to certify any paying customer that he once certified a cat as a toxicologist.

Sawyer is a full-time expert witness in glyphosate product liability trials, an occupation that has made him a millionaire. Billing $785 an hour for his time, Sawyer has collected $2.5 million from his testimony in four Roundup® trials, according to his own testimony at trial.

At least Sawyer had academic training in toxicology. Fellow expert witness Charles Benbrook, by con- trast, testified about the health effects of glyphosate despite having no training whatsoever in medicine, toxicology, or epidemiology.

Benbrook runs the Heartland Health Research Alliance (HHRA) which produces studies linking cancer to herbicides like Roundup®, as well as competing herbicides like dicamba and 2,4-D. His studies are likely laying the groundwork for future lawsuits against those products.

The trial bar sees great value in Benbrook’s endeavor, rewarding him $1.3 million for his testimony in addition to the $220,000 annual salary he takes from his non-profit, scientific research organization. The trial bar not only provides funding, it provides management direction. The vice chair of that organization is Robin Greenwald, a partner at Weitz & Luxenberg, one of the many firms suing Monsanto.

Environmental safety agencies in the United States, Canada, Brazil, Australia, New Zealand, Japan, and the European Union have spent decades reviewing the health impacts of glyphosate. All agree that no credible evidence exists linking glyphosate to non-Hodgkin’s lymphoma. But there is one outlier organization that says otherwise and it is heavily relied upon by plaintiffs’ lawyers. An advisory group of the International Agency for Research on Cancer (IARC) deemed glyphosate a “probable human carcinogen.” Testimony in 2017 by a senior scientist on that IARC panel revealed critical evidence favorable to glyphosate had been withheld and would likely have changed IARC’s conclusion. The panel was run by Christopher Portier, a scientist who received $160,000 from litigators and worked under the direct supervision of Robin Greenwald.

The jurors bailed out the system this time around, but for St. Louis to move off the Hellholes® list, judges must embrace their role as gatekeepers at the outset of trial and not allow junk science to be heard in their courtrooms.

The first Roundup® trial in the City of St. Louis began at the beginning of November. The plaintiff claims that he developed cancer due to prolonged exposure to the herbicide. ATRF will keep a watchful eye on the case to see whether Judge Michael Mullen permits junk science to be introduced in his courtroom.

A HISTORY OF NUCLEAR VERDICTS

According to a 2022 U.S. Chamber study, Missouri ranked in the top-10 for most nuclear verdicts from 2010-2019. Nuclear verdicts are those that exceed $10 million. This includes a $4.69 billion verdict awarded by a City of St. Louis jury in 2018 to women who claimed use of baby powder caused their development of ovarian cancer. The verdict was later reduced by an intermediate court to $2.12 billion. The St. Louis area also has hosted several other nuclear verdicts in recent years, such as a $110 million and $72 million in earlier talcum powder trials, both of which were thrown out on appeal.

Among the factors contributing to these massive verdicts is the allowance of “anchoring.” Missouri law permits plaintiffs’ lawyers to urge juries to return a specific amount to compensate a person for his or her pain and suffering and other subjective noneconomic damages. Lawyers will suggest an unreasonably large award, making that number an “anchor” point in jurors’ minds. As a result, jurors can be manipulated into awarding levels that are far beyond amounts they would otherwise reach and that can truly serve a compensatory purpose.

A FAVORITE JURISDICTION FOR ASBESTOS LITIGATION

While much-needed asbestos trust transparency legislation continues to stall in the Missouri legislature, St. Louis remains a preferred jurisdiction for the plaintiffs’ bar. St. Louis once again was in the Top-10 for the most asbestos cases filed overall (5th), and the most mesothelioma (8th) and lung cancer (2nd) filings in 2021. As of July 2022, St. Louis had seen a decline in filings and ranked sixth in most asbestos cases filed overall.

A 2022 nuclear verdict in an asbestos case in St. Louis highlights the need for reform. In Trokey v. Chesterton Co., the plaintiff claimed he was exposed to asbestos while working on Ford brakes as a gas station mechanic, causing him to develop mesothelioma. Ford argued that the plaintiff never worked for Ford, did not regularly work as a mechanic, and that his exposure likely came from a source other than brake linings. Nonetheless, the jury awarded $20 million – $10 million to him and $10 million to his wife. Anchoring played a part in that award. The $20 million award was the same amount the plaintiffs’ lawyer requested in his closing argument.

In 2017, the Missouri Legislature passed S.B. 31, which included an overhaul of the collateral source rule. For years, the statute was interpreted by all to prohibit the introduction of evidence to recover damages based on the amount billed by a healthcare provider if that amount was more than the amount that was paid by a patient or on the patient’s behalf for treatment. This rule, which is consistent with the statutory text and legislative intent, limited the recovery to the amount actually paid for medical care.

In recent years, however, Missouri courts have allowed plaintiffs’ lawyers to introduce evidence of the inflated amount billed for “any other purpose” to show severity of injuries, rather than directly introduced for the amount sought to be compensated. Allowing this evidence of the amount billed has artificially increased damage awards, delayed settlement of cases and increased the cost of insurance premiums in Missouri.

Missouri should close the loophole and prohibit the admissibility of billed amounts for medical treatment that no one ever paid.

Missouri has made progress in recent years addressing areas in which St. Louis and other areas of the state are prone to lawsuit abuse. The jury is out on whether courts have faithfully applied these legislative changes. For example, a recent study found that although the Missouri legislature made it easier for courts to quickly dismiss meritless consumer class actions in 2020, “the limited decisions available suggest that courts have not yet fully recognized the significance of the changes.” The judiciary has also not yet updated its jury instructions to reflect the new, higher standard for punitive damage awards adopted in the same bill.

Instead, effective July 1, 2022, the committee overseeing the instructions placed a “CAUTION” comment on the existing instruction flagging the legislative change and indicating that “case law will determine the extent of those changes and the impact on jury instructions.” The Committee felt the need to state in the new comment that it “takes no position on the constitutionality of any provision of S.B. 591.”

Despite these questions, as lawsuit abuse continues in St. Louis courtrooms, the Missouri Legislature must prioritize civil justice reform to ensure the state has a fair and balanced judicial system. Much work remains to be done.

The legislature failed to pass three key bills in its 2022 legislative session. The first, S.B. 631, would have reduced the statute of limitations in personal injury cases from five years, which is among the longest in the country, to two years. The second, S.B. 669, would have required a plaintiff to prove that the defendant designed, manufactured, sold, or leased the particular product that was alleged to have caused the injury and not a similar or equivalent product. Its purpose is to cut off the novel innovator liability theory that attempts to hold makers of brand name products liable for injuries alleged to have occurred from taking a generic version of a product. Courts have widely rejected this theory. Finally, the legislature failed to consider H.B. 2017, which would have addressed concerns that the anchoring practices discussed above are resulting in excessive awards. The bill specified that neither party nor their attorney could seek or make reference to a specific dollar amount or state a range for awards for noneconomic damages for the jury to consider. Given St. Louis’s propensity for high verdicts, this reform would have gone a long way.