Jurisdictions in Illinois have been named Judicial Hellholes® every year since the report’s inception. Recurring issues over the past 20 years include lawsuits that don’t actually claim any sort of injury occurred, including those related to data privacy, asbestos litigation, and out-of-state lawsuits.  Making matters worse, the Illinois plaintiffs’ bar is one of the most powerful in the country, donating millions to the campaigns of Illinois office seekers.

Lawyers know this is a Judicial Hellhole – spending on local TV trial lawyer ads increased nearly 70% between 2016 and 2020. 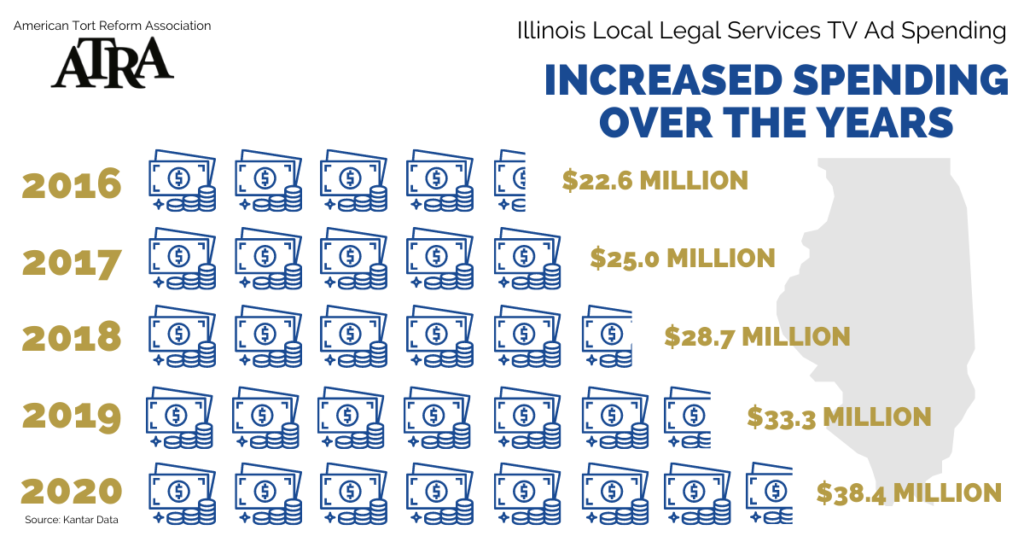 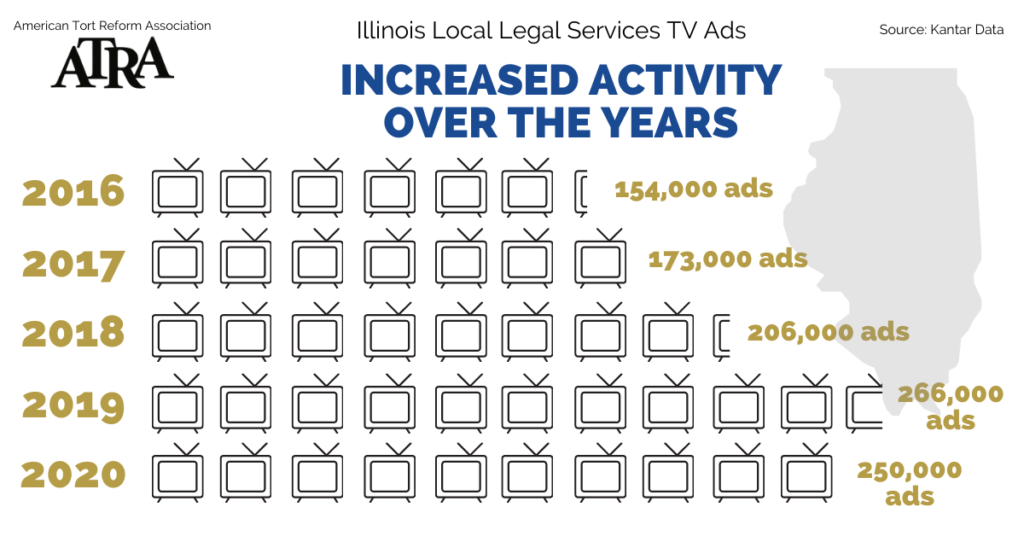 We know through research that frivolous tort cases or those that result in excessive damages and rewards can have negative consequences on the economy. These excessive tort costs are destructive to American businesses and harmful to consumers, wiping out billions of dollars of economic activity on an annual basis. A 2021 study by John Dunham & Associates found that if Illinois enacted certain tort reforms, the resulting savings to residents and businesses of the state would be more than $13 billion. This means that the residents are in effect paying a “tort tax” of $1,049 per person. According to this study, the savings from reforming Illinois’s tort system could support an additional 140,630 jobs and $27.51 billion in increased economic activity.

Illinois continues to be the preferred destination for plaintiffs’ lawyers to bring asbestos lawsuits, with the trio of Madison, St. Clair and Cook Counties leading the way. Plaintiffs flock to these courts thanks to plaintiff-friendly reputations, low evidentiary standards, and judges’ willingness to allow meritless claims to survive.

In 2020, Madison County alone accounted for almost 32% of all asbestos filings nationwide with 1,168 filings, the most of any jurisdiction in the country. St. Clair County came in second, accounting for 11.5% of national filings. Combined, these three counties accounted for 47% of all nationwide asbestos claims in 2020, an increase from only 40% in 2019. 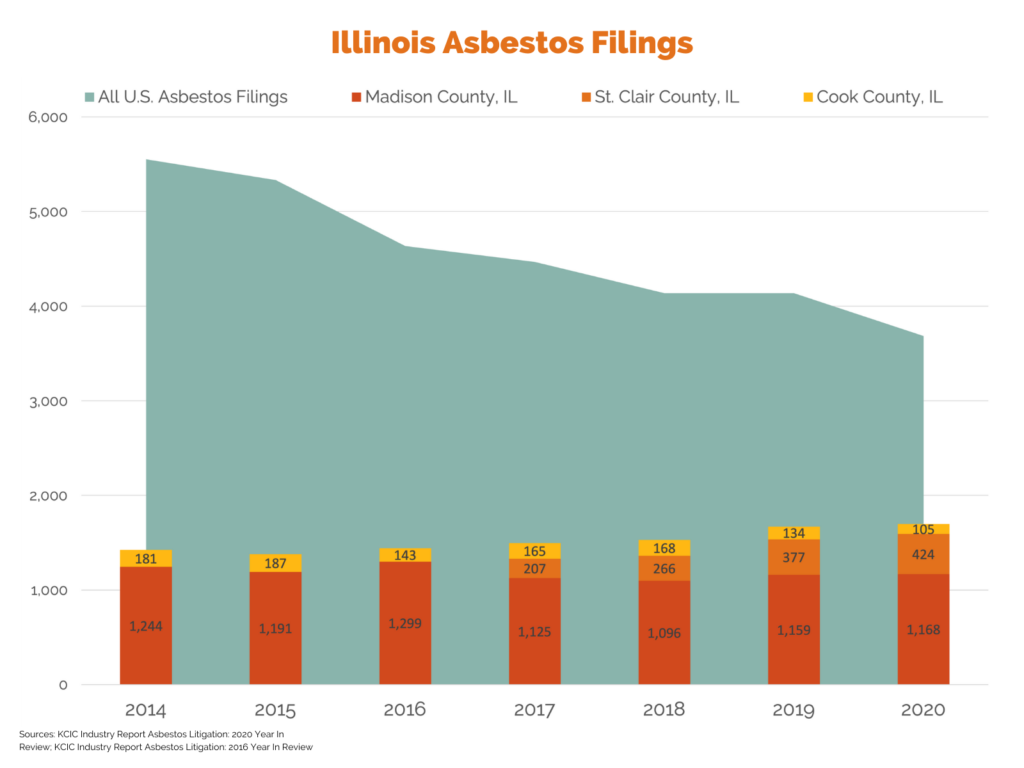 While the number of asbestos claims in Illinois is already an issue, the amount of those claims brought by non-residents is shocking – when looking at complaints including plaintiff address information, only 3% of all plaintiffs in 2020 had an Illinois address.

Illinois lawmakers enacted the Biometric Information Privacy Act (BIPA) in 2008, but it lied dormant until 2015 when plaintiffs’ lawyers discovered its business potential.

BIPA provides a private right of action to a person whose fingerprint, voiceprint, or hand or facial scan, or similar information is collected, used, sold, disseminated or stored in a manner that does not meet the law’s requirements. 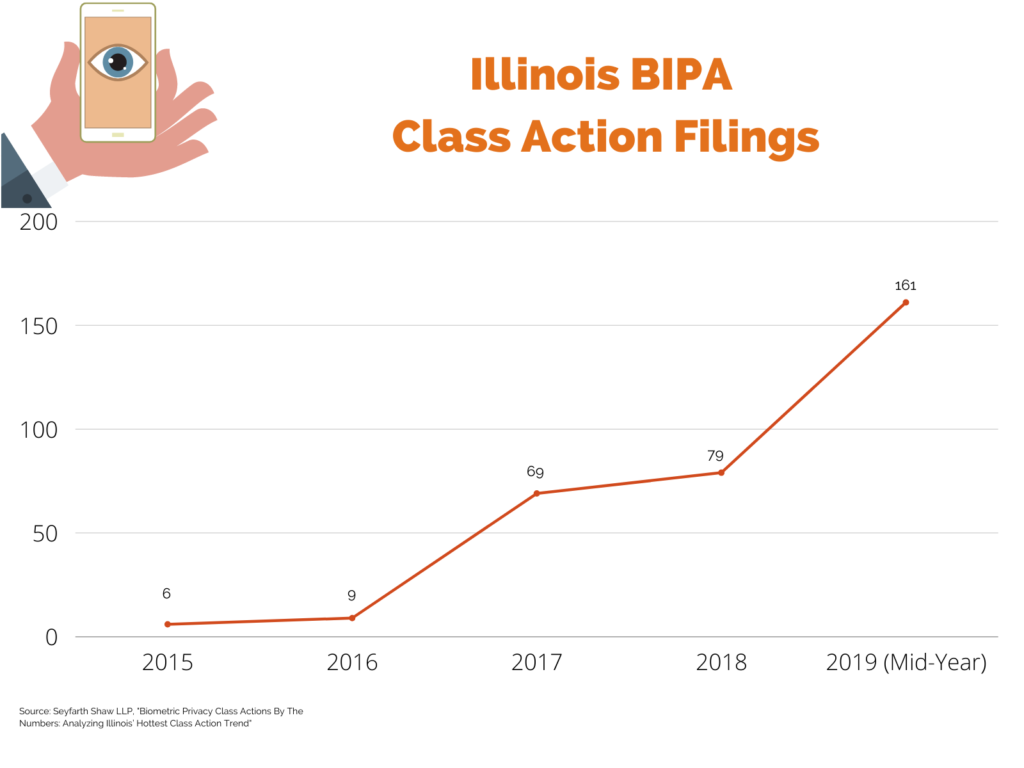 In January 2019, the Illinois Supreme Court issued its long-awaited decision in Rosenbach v. Six Flags Entertainment. The Court found that a plaintiff does not need to have suffered actual harm to maintain and win a lawsuit filed under BIPA.

Following this decision, BIPA lawsuits were brought against several companies, including Walmart and Whole Foods by employees. It’s commonplace for employees to clock in using fingerprint scanners, and employees can recover civil penalties simply because the company doesn’t properly notify employees before their fingerprints or handprints are scanned – even if there is no real world harm.

Illinois’s powerful trial bar has long intervened in the state’s political processes, ensuring that the already plaintiff-friendly jurisdictions only become more friendly to these attorneys’ pockets. Despite the Illinois Trial Lawyers Association claiming more than 2,000 members as of 2016, all major contributions to its PAC come from lawyers and law firms in the trio of Cook, Madison, and St. Clair counties.

While other states have looked to enact civil justice reform, Illinois’s legislature and judiciary have continued to expand liability, likely amid pressure from the trial lawyers who consistently fund the election of plaintiff-friendly lawmakers.

From 2001 to 2016, trial lawyers contributed more than $35 million to campaigns of Illinois office seekers. These contributions largely funded Governor J.B. Pritzker’s 2018 election, and once he took office, the floodgates opened and the legislature looked to expand liability wherever it could.

Illinois jurisdictions have even seen plaintiffs’ lawyers be elected to state attorney offices. In 2016, Cook County elected Kim Foxx as its state’s attorney. Foxx had previously done legal consulting work for a personal injury law firm that had filed numerous lawsuits against the county government she now defends. The firm also contributed $18,500 to her campaign, but Foxx refused to acknowledge the obvious conflict of interest and refused to disclose any other personal injury firms she may have worked with in the past.

Lawyers know this is a Judicial Hellhole – spending on local TV trial lawyer ads increased nearly 70% between 2016 and 2020.

Excessive tort costs result in an annual tort tax of more than $1,000 paid by each Illinois resident – but the problem continues to worsen.

The Illinois Supreme Court rendered a blow against litigation tourism that leads to Judicial Hellholes in its June 2020 ruling in Rios v. Bayer Corp. & Hamby v. Bayer Corp. In each of these cases a Madison County resident joined with scores of out-of-state plaintiffs to sue Bayer in Madison County over the safety of Essure, a permanent birth control product. The Illinois Supreme Court dismissed the claims of the out-of-state plain- tiffs for lack of jurisdiction because Bayer is not located in Illinois and does limited business there, the product was not manufactured in Illinois, and the plaintiffs experienced their injuries outside of Illinois.

Where will Illinois's counties fall this year?

Be the first to find out if Illinois’s most litigious counties will continue as Judicial Hellholes® when our 2021-2022 report comes out in December.