Jurisdictions in Florida were named Judicial Hellholes® a total of 16 years, plus two years on the report’s Watch List. Recurring issues over the past 20 years include personal injury protection coverage, phantom damages, letters of protection, junk science, bad faith, and up until recently, the state’s Supreme Court. 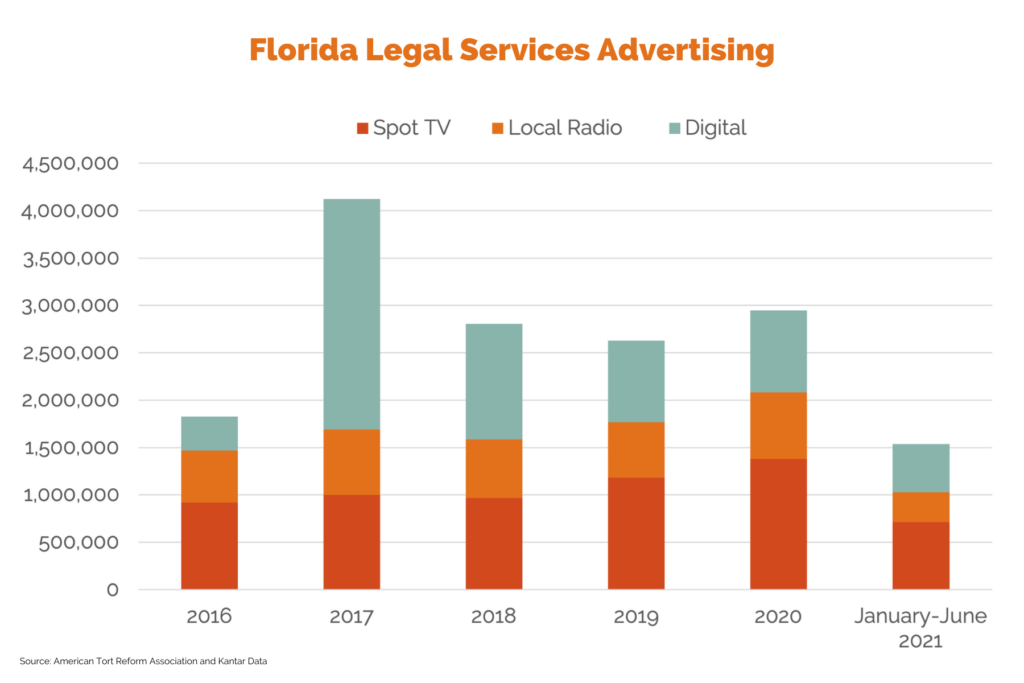 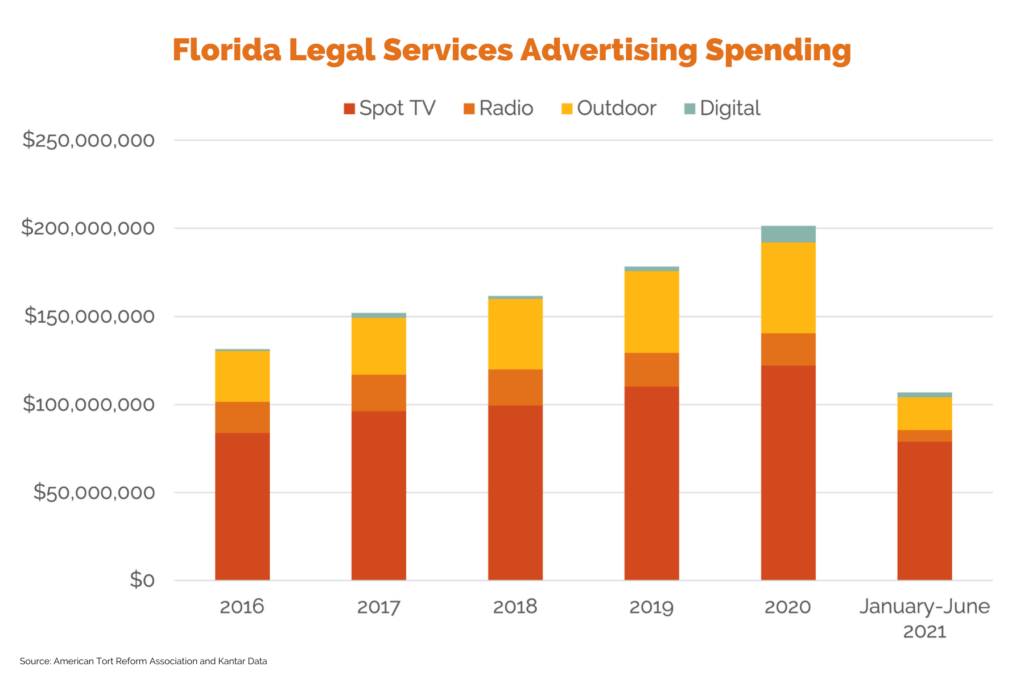 We know through research that frivolous tort cases or those that result in excessive damages and rewards can have negative consequences on the economy. These excessive tort costs are destructive to American businesses and harmful to consumers, wiping out billions of dollars of economic activity on an annual basis. A 2021 study by John Dunham & Associates found that if Florida enacted certain tort reforms, the resulting savings to residents and businesses of the state would be more than $5.3 billion. This means that residents are in effect paying a “tort tax” of $251 per person. According to this study, the savings from reforming Florida’s tort system could support an additional 71,971 jobs and $11.52 billion in increased economic activity.

Although there is much work to be done, the election of Governor Ron DeSantis (R) has heralded a sea change in Florida’s legal landscape, beginning with the appointment of several new Florida Supreme Court justices. This new court is deferential to legislative efforts to stop lawsuit abuse and poised to correct the course set by the prior activist court. In January 2019, newly elected Governor Ron DeSantis replaced these three retiring justices with three textualists, Barbara Lagoa, Robert Luck, and Carlos Muñiz. Luck and Lagao each left the Florida Supreme Court in late 2019 when they were appointed to serve on the U.S. 11th Circuit Court of Appeals. They were replaced in 2020 by two new DeSantis appointees, Justices John D. Couriel and Jamie R. Grosshans.

Junk Science in the Courts

A significant contributor to South Florida’s reputation for a poorly balanced civil justice system had been the state’s application of an anything-goes standard for admission of purported expert testimony known as the “Frye/Marsh test.” Under this standard, most of the testimony offered in Florida by so-called experts was subject to little or no judicial scrutiny. This allowed jurors to be misled by junk science in product liability, medical malpractice and other complex cases.

In 2013, after a seven-year effort, Florida lawmakers adopted the more rigorous approach followed in federal and most state courts, known as the Daubert standard. However, judges dragged their feet in applying the standard.

In 2019, less than five months after Governor DeSantis appointed the three new justices, the Supreme Court — of its own volition — adopted the Daubert standard as the governing standard for admissibility of expert evidence in Florida, observing that the prior court’s “constitutional concerns” with the law “appear unfounded.” The Court agreed that the adoption of Daubert “will create consistency between the state and federal courts with respect to the admissibility of expert testimony and will promote fairness and predictability in the legal system, as well as help lessen forum shopping.

After 15 years as a Judicial Hellhole®, Florida Governor Ron DeSantis ushered in big changes for Florida's civil justice system which have turned things around in the Sunshine State.

The history of fraud in Florida’s “no-fault” personal injury protection (PIP) system has been long chronicled in the Judicial Hellholes® report. Under the current PIP system, insurers are required to pay up to $10,000 for medical expenses stemming from auto accidents no matter who is at fault. Florida lawyers and their associates have been abusing the system for years, contributing to why Floridians have some of the highest car insurance rates in the country.

In 2018, the Florida legislature considered a bill that would have repealed the PIP system and replaced it with a bodily-injury coverage requirement, but the bill died in committee. It was criticized because the proposed changes would have increased costs for motorists and many said it was simply “PIP by another name.” The House considered another bill that was projected to save motorists on average $81 a year, but that effort failed as well.

A 2017 multi-million dollar insurance fraud scheme by “corrupt lawyers” in South Florida shows an overwhelming need for “no-fault” PIP reform. The lawyers tricked clients into believing they had lucrative lawsuits, encouraged them to visit a network of chiropractic clinics, and convinced them to have expensive treatments, even when uninjured. Accident victims were pushed to make dozens of unnecessary visits to the clinics until their bills reached the maximum $10,000 PIP benefit.

These South Florida lawyers were not the only ones involved in this type of litigation, as the number of PIP cases reached a record high in 2017. The PIP system, which was supposed to reduce the number of lawsuits, instead produced more than 60,000 new cases last year alone—a stunning increase of almost fifty percent in one year. PIP cases are by far one of the largest sources of litigation in Florida, representing over half of the state’s overall insurance litigation. These lawsuits significantly drive up consumer costs and directly impact the average Floridian. Some Florida drivers saw their premiums for PIP coverage increase by more than 50% in 2017 alone.

Under Florida law, at trial, jurors learn the initially invoiced amount of medical expenses, which is essentially a “sticker price” that is often three or more times the amount that is ultimately accepted by the healthcare provider as full payment. After a verdict, Florida law requires judges to adjust the award to reflect the actual amount of medical expenses paid and accepted, a process called a “set off.” Florida’s personal injury lawyers often use letters of protection to avoid this set off. By avoiding evidence of the actual value of medical treatment, there is no amount paid for a judge to set off the award.

This type of abuse benefits no one but the lawyers and the medical clinics that may be in cohorts with them. The lawyers get to inflate the damage award and collect a larger contingency fee. The medical provider gets paid a rate that is much higher than market value. The plaintiff, however, has these high rates taken from his or her share of the judgment, even if they would have been covered by insurance.

At a February 2019 hearing before a committee of the Florida House of Representatives, a representative of the popular supermarket Publix testified that the grocer’s costs run 65% higher per claim in Florida than in other states in which it operates, and 50% higher in South Florida than the rest of the state, precisely because of this type of abuse. Letters of protection, she noted, result in “manufactured medical damages that have no basis in reality.”

Legislation can ensure that jurors receive accurate information on the actual value of medical expenses and prohibit abuse of letters of protection. The legislature should also revisit the need to place reasonable constraints on subjective and unpredictable noneconomic damage awards, which are particularly important for preserving access to affordable medical care.

In Florida, the jury only hears the billed rates. Florida law prohibits introduction of evidence regarding medical bills that have been discounted or written off by health care providers. While a trial court judge will later “set off” (deduct) amounts not paid from the verdict, South Florida personal injury lawyers have developed a way to avoid such a reduction. They often enter a “Letter of Protection” with a client’s doctor, which is an agreement to defer payment of medical expenses until after a lawsuit results in a judgment. Since there is no amount “actually paid,” only the amount billed, the arrangement avoids a set off, leading to an excessive award.

Medically unnecessary procedures are a second cause of inflated medical damages. Thousands of fraudulent or unnecessary procedures are ordered in Florida every year. This occurs for the purpose of inflating the value of personal injury claims. Florida law requires plaintiffs to prove that their medical treatment is medically necessary. If a defendant presents evidence that the plaintiff’s treatment was not medically necessary, however, Florida courts have held that such an argument is tantamount to accusing the plaintiff’s treating physician of medical malpractice, entitling the plaintiff to a so-called “Stuart instruction.”

Florida drivers have had to pay higher auto insurance rates as a result of lawsuits in which personal injury lawyers claim that the insurer whose policyholder caused the accident later acted in bad faith to delay or avoid paying a claim. These so-called “third-party bad faith lawsuits” are filed even when insurers promptly offer to pay a policy’s limit. In ginning up such claims, plaintiffs’ lawyers often engage in “gotcha” tactics, such as ducking claims adjusters’ phone calls or coaching their clients to avoid meetings until the bad-faith deadline has passed without a settlement of the claim. Many states do not authorize third-party bad faith lawsuits against insurers, but the Florida Supreme Court has historically allowed such claims and permitted lawyers to manipulate the system.

Bad faith lawsuits targeting insurers continue to be fertile ground for trial lawyers looking to game the system, but in 2020, the Florida legislature continued to avoid addressing the larger issues at play. This is especially disappointing as more than 80 percent of Floridians think it is unfair that insurance rates rise due to excessive lawsuits and inaccurate claims against insurance companies. Currently, most often in situations where there is clear liability, substantial damages, and low policy limits, trial lawyers use delay tactics and multi-pronged, impossible-to-satisfy demands to set insurers up for a bad faith action.

Legislation introduced in 2020 would have established a “reckless disregard” standard for third-party bad faith lawsuits, and procedures for settling claims with multiple claimants in order to avoid bad faith.

The Florida Legislature passed reforms in 2019 designed to curtail unnecessary bad faith litigation against insurance companies. This new law will provide a more reasonable time for insurers and their policyholders to resolve disputes through an appraisal process.

Bad faith lawsuits can result in eye-popping numbers. In just one notable bad faith action, Harvey v. GEICO, the insurer tendered the full $100,000 policy limits nine days after the accident, but was ultimately hit with an $8.47 million judgment.

Legislators must address the process that leads to these distorted results or risk jeopardizing the judicial system’s legitimacy.

While significant improvements have been made in Florida in recent years, there is still work to be done.

Trial lawyers continue to spend millions to advertise in the Sunshine State, while excessive tort costs result in an annual tort tax of more than $250 paid by each Florida resident.

Will Florida stay on track?

Be the first to find out if Florida can stay off the Judicial Hellholes® rankings when our 2021-2022 report comes out in December.