The American Tort Reform Association has issued a “Hailstorm Lawsuit Warning” for Hidalgo County, Texas, that may be extended to similarly plaintiff-friendly jurisdictions elsewhere across the Lone Star State where several thousand hail damage claims are now being filed annually, according to Steven Badger of Dallas-based Zelle LLP. 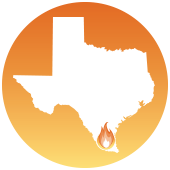 Property Casualty 360 reported in April 2016, when “severe storms and extensive damage come to [Texas], so do the contractors, public adjusters and lawyers who use questionable solicitation and business tactics to insert themselves into the insurance claims settlement process. They hijack the process by seeking claims that are beyond the actual losses and taking legal actions that delay settlements and generate large legal fees. Heavy filings, many groundless, pose a danger to business.”

EYE OF THE STORM

Bad weather happens, especially in Texas and other Gulf Coast states. Often it’s hurricanes that cause most of the damage in this region. But with the hurricane front relatively quiet since Ike in 2008, knock wood, the flood of storm claims more recently has been driven largely by alleged hailstorm damage. And Hidalgo County remains at the eye this storm. More than half of the roughly 21,000 hailstorm suits filed in Texas between 2012 and 2015 were filed in this largely agricultural county at Texas’s southern tip along the Rio Grande. And in 2016 it remained a favorite jurisdiction for hailstorm plaintiffs’ lawyers, particularly for Steve Mostyn and his associates at the Houston-based Mostyn Law Firm.

A self-described pit-bull, Mostyn persists in his hailstorm practice even as insurers have begun to fight back and some judges have become sufficiently critical of his co-counsel’s conduct to begin issuing sanctions. But as regular readers of this report have learned, many personal injury lawyers have come to believe that they don’t need to win every case, they only need to win often enough to get rich. And certainly the multimillionaire Mostyn has won often enough to get rich. And his wealth has enabled him to become quite the generous contributor to the campaigns of lawsuit loving politicians and judges. But we digress.

Although Mostyn is arguably the creator of the mass-tort litigation model following natural disasters, he is far from the only Texas-based plaintiff’s attorney to take part in this scheme. The State Bar of Texas recently suspended trial attorney Kent Livesay for one year for engaging in illegal case running related to hail claims, and Texas-based firm Speights & Worrich is essentially dissolving in the face of a class action barratry suit against it for hail-related litigation activities.

FIGHTING BACK, DEFENDANTS GET HELP FROM FEDERAL JUDGES

In something of a pleasant surprise in March and April of 2016 a federal judge with a lifetime appointment to the bench and no need to curry political favor with the likes of Mr. Mostyn dismissed several of his firm’s storm suits against insurance company defendants.

U.S. District Judge Micaela Alvarez sharply criticized his many meritless complaints’ glaring lack of evidence, writing, “The court notes that this case, like many storm related insurance breach of contract cases filed by the Mostyn Law firm, is factually unsupported. In particular, it appears that between August 2012 and April 2014, no factual issues developed that support the claims . . . .”

Judge Alvarez also ordered Mostyn to attend a “show cause” hearing in May, during which he tried to persuade her against leveling sanctions against him and his firm. She admonished him for bringing groundless cases and urged him to sternly warn his junior associates against doing do. He said he would, and she did not order sanctions immediately, saying she would further consider the matter.

But in late July 2016, U.S. District Judge Ricardo Hinojosa was less equivocal. He dismissed another 17 hailstorm cases, all originally filed in Hidalgo County by Mostyn or his associates. Three of those dismissed were filed in the name of Mostyn serial plaintiffs Mark and Kelly Dizdar. One of their cookie-cutter suits were among those dismissed earlier by Judge Alvarez. And Judge Hinojosa went a step further by sanctioning Mostyn’s co-counsel in two of the cases he threw out.

INSURANCE LESS AFFORDABLE IF AVAILABLE AT ALL

Thankfully, there have been a number of additional court defeats for Mostyn and other storm-chasing lawyers in 2016. But defendant insurance companies certainly can’t win them all, and all their litigation costs must ultimately be passed onto their homeowners policyholders across the state in the form of higher premiums. Some of those annual premiums have gone up more than 100% in recent years while thousands of former policyholders have lost their coverage altogether as at least three insurance carriers have simply stopped writing policies altogether in litigious Hidalgo County.

Attorney Steven Badger, cited above, wrote candidly of storm-related litigation for the Claims Journal in April 2016:

No one disputes that insurance companies should promptly and fully pay to repair building components damaged by hail consistent with the terms of their policies. Insureds should be brought back to their pre-loss condition with materials of like kind and quality. . . . And when insurance companies knowingly fail to meet these fundamental obligations, they should face penalties . . . .

LAWMAKERS TO THE RESCUE?

A week later, Badger wrote again in the Claims Journal, this time laying out a thoughtful and well received blueprint for reforming a system that simply lets too many unscrupulous parasites profit at the expense of honest, hardworking homeowners and premium payers.

Among other things, Badger call for:

There’s more to Badger’s comprehensive blueprint, and it’s unclear how much (or any) of it Texas lawmakers in January 2017 will be inclined to consider. But Texas Lieutenant Governor Dan Patrick has already made stopping hailstorm lawsuit abuse a priority item for the upcoming legislative session. And ATRA’s sources in Austin say a strong coalition of lawmakers is gearing up to move a storm lawsuit reform measure. In the interests of both justice and affordable insurance, here’s hoping they can push sound legislation over the goal line.