The Pelican State’s legal climate has suffered at the hands of powerful trial attorneys and the politicians they have controlled for decades. Plaintiff-friendly courts, excessive jury verdicts, problematic venue laws, widespread judicial misconduct, a lack of transparency in asbestos litigation and trust claims, disability-access lawsuits targeting small businesses, broad misuse of consumer protection laws, and the highest jury trial threshold in the nation are just a few of the more pressing issues that contribute to the state’s longstanding reputation as one of the worst places in the country to be sued. Indeed, a report much longer than this one could be written about the proliferation of merit- less litigation in Louisiana.

The 2015 election of Gov. John Bel Edwards, a trial lawyer, has helped further stack the deck against defendants down on the bayou, and Louisiana is unlikely to escape this litigiously fevered swamp anytime soon.

Litigation is a growing industry in Louisiana, and meritless lawsuits are on the rise. Of particular concern is the seemingly endless array of lawsuits targeting energy companies with allegations of environmental harms. Current litigation concerns include thousands of legacy oilfield claims and “public nuisance” claims alleging groundwater contamination with methyl tertiary butyl ether or MTBE, a gasoline additive once mandated by federal law.

Under his leadership, the state has joined forces with six local parishes to file more than 40 lawsuits targeting major providers of oil and gas jobs in Louisiana. This summer, the governor added even more fuel to the hellholes fire when he hired one of his top political fundraisers to represent his o ce and the Louisiana Department of Natural Resources in an anticipated wave of new lawsuits, promising, “We’re going to be active litigants going forward.”

The Edwards administration has argued the suits are necessary to force energy companies to restore wetlands they allegedly damaged with exploration and production operations dating back to the 1930s. But the governor’s ongoing effort to enlist wealthy political supporters to run and possibly reap enormous legal fees from the litigation suggests other powerful motives may be at play. As noted in previous reports, the lawsuits assert a smorgasbord of legal theories apparently intended to keep the cases in friendlier state courts where defendants’ pesky demands for evidence that they are actually liable will more likely be ignored or silenced.

By contrast, a similar lawsuit filed by trial lawyers on behalf of the Southeast Louisiana Flood Protection Authority-East in 2013 has been repeatedly rejected and blatantly described by a federal court as “a collateral attack on an entire regulatory scheme.” This should have sent a strong message to Louisiana’s politicians that deep pocket justice doesn’t pay. But they seem to be hoping for better luck in state courts.

These actions will only continue to move Louisiana in the wrong direction and further weaken the state’s struggling economy, which has lost thousands of jobs and major manufacturing projects in recent years.

This report routinely documents California’s ongoing run as the nation’s epicenter for disability access lawsuits. But if some personal injury lawyers in the Pelican State have their way, Louisiana may soon contend for that ignominious title as the number of claims targeting small businesses for minor violations of the Americans with Disabilities Act (ADA) continues to rise.

According to court data compiled by the nonprofit watchdog group Louisiana Lawsuit Abuse Watch, the filing of disability-access complaints in Louisiana has increased more than 360 percent in the past six years. Noteworthy is the fact that more than half of the plaintiffs in these suits are represented by personal injury lawyer Andrew Bizer with the Bizer & DeReus law firm.

The lawsuits, which frequently target local and state governments, landowners, shopping centers and other small businesses, often involve serial plaintiffs and are often filed without giving notice to the business owners, who are forced to spend scarce resources on settlements or preparing a defense rather than addressing and repairing the violation and removing the barrier. For example, one plaintiff in Shreveport, Louisiana has filed 17 lawsuits over the last year and a half, six of which have already been settled for undisclosed amounts. 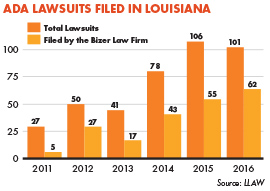 This shameful approach violates the spirit in which this important statute was written.

‘Jumping on an increasingly crowded bandwagon of state and local government entities nationwide that have done the same, Louisiana’s Department of Health in September 2017 filed a lawsuit against the pharmaceutical industry alleging that, “Drug manufacturers undertook an orchestrated campaign to flood Louisiana with highly addictive and dangerous opioids… in an effort to maximize profits above the health and well-being of their customers….”

Leaving aside the merits of such claims, Louisiana’s suit is notable because it was not initiated by the attorney general or local prosecutors. The driving force behind the litigation is none other than the state’s trial lawyer-turned governor himself.

Gov. Edwards’ involvement in the opioids case certainly will not help his already tendentious relationship with state Attorney General Jeff Landry, who has moved to wrestle control of the opioid litigation away from the governor. And many expect Landry to challenge Edwards’ reelection in 2019.

Meanwhile, other critics of the governor point to his expansion of Medicaid under the federal Affordable Care Act, known colloquially as “Obamacare,” as a significant factor in the state’s opioid problem. But as any successful personal injury lawyer learns early on: Never take responsibility if you can blame someone else. (See more on “Opioid Litigation” in Closer Looks, p.66.)

Corruption in Louisiana courts is a cancer eating away at the heart of the state’s justice system. There has been evidence of inefficiency, incompetence and unethical conduct by members of the bar, court staff and judges for decades.

For proof we need look no further than news headlines. In the early 2000s the FBI’s sprawling investigation dubbed “Operation Wrinkled Robe” ensnared four state judges and dozens of well-known attorneys and bail bondsmen, all of whom took part in an illegal kickback scheme at the parish courthouse.

In 2010, the Louisiana judiciary suffered another national embarrassment when Congress impeached former New Orleans federal Judge Thomas Porteous for a litany of charges, including accepting cash and gifts from lawyers with cases pending in his court.

Another glaring, long-running saga of judicial misconduct finally climaxed in 2017 as former Louisiana 18th Judicial District Judge J. Robin Free, who developed a national reputation as a repeat offender with numerous ethical lapses over two decades, was forced to resign.

In 2001 Judge Free was admonished twice by the Louisiana Judiciary Commission after he failed to recuse himself in two separate cases in which he knew the defendants. After being censured by the judiciary commission, he assured its members that he had learned from his mistakes. But apparently not.

In 2009, Judge Free again refused to recuse himself from an environmental class-action lawsuit alleging groundwater contamination, even though his mother lived within the allegedly contaminated area and was therefore part of the affected class. He eventually received a 30-day slap-on-the-wrist suspension from the Louisiana Supreme Court for his third ethical transgression, but his inappropriate conduct continued.

In 2015 Judge Free was suspended again for 30 days without pay and forced to pay a $7,000 fine after the state’s high court concluded he had “harmed the integrity of and respect for the judiciary” by accepting lavish gifts from trial lawyers involved in a case before his court.

In 2016 he was suspended yet again—this time for one year without pay and fined $11,000—for abusing his contempt authority in formal proceedings and making inappropriate comments toward women during domestic abuse hearings. More recently, the judge came under investigation after several bizarre confrontations with local law enforcement officers and, thankfully, Judge Free announced his retirement in June 2017.

But that he was allowed to resign, rather than being forcefully removed from the bench by his peers much earlier in his disgraceful judicial career suggests many Louisiana judges and justices may be more concerned with protecting each other than the public interest.

These and many other instances of influence peddling, cronyism and corruption contribute to Louisiana’s stubborn reputation as a Judicial Hellhole. Since 2000, at least 10 Louisiana judges have been removed or resigned their seat on the bench due to judicial misconduct, while many others have been sanctioned. And a review of state Supreme Court judicial misconduct opinions shows more than 40 Louisiana judges have been publicly disciplined by the high court over the last decade for violating their oaths and abusing the authority.

Such conduct has eroded the public’s trust in the state’s judiciary. It also discourages business large and small from investing in and creating new jobs for Louisiana’s struggling economy. So if the judiciary is unwilling or unable to hold themselves to a much higher standard of ethical conduct, then the state lawmakers should take action to implement standard-raising reforms. Improving transparency and accountability throughout the judiciary are a must.