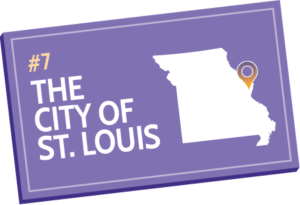 A perennial Judicial Hellhole®, St. Louis once again finds itself on the list; however, made some important progress through legislative reforms. But while the legislature has prioritized civil justice reform, there is more work to be done.

The future success is contingent on the St. Louis court’s proper application of the new statutes. Some St. Louis judges have a history of ignoring both state law and U.S. Supreme Court precedent regarding expert evidence standards, personal jurisdiction and venue, and damage awards. 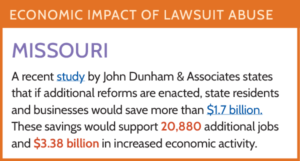 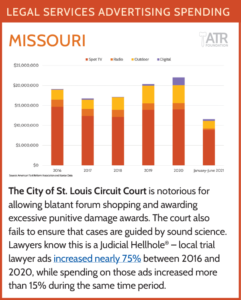 Personal injury lawyers flock to St. Louis to file their lawsuits and to take advantage of the plaintiff-friendly judges. These out-of-state plaintiffs clog the city’s courts, drain court resources, and drive businesses out of the state leading to job loss.

Despite the legislature requiring closer scrutiny of proposed expert testimony in 2017 by adopting a standard consistent with federal courts and most other state courts, St. Louis judges have allowed junk science to be heard in their courtrooms. Plaintiffs’ experts, whose testimony has been determined to not be based in science by other state courts, have been permitted to testify in St. Louis courts.

In June 2021, the U.S. Supreme Court delivered an important reminder about the importance of states enacting civil justice reform and reining in activist judges. The Court announced that it would not review a landmark talcum powder case (Ingham) which resulted in a multi-billion-dollar verdict out of the City of St. Louis Circuit Court. The Supreme Court grants certiorari in less than 2% of cases and it is dangerous to rely on the high court to police the decisions of rogue state judges.

In July 2018, a City of St. Louis jury awarded $4.69 billion – $550 million in actual damages and $4.14 billion in punitive damages – to a group of 22 plaintiffs. The women claimed that their ovarian cancer was caused by exposure to asbestos allegedly found in Johnson & Johnson’s baby powder. Of the 22 women involved in the lawsuit, 17 had no connection to Missouri. Each was awarded the same amount of money, despite there being different facts for each, and differences in relevant law. After a six-week trial, jurors deliberated for less than a full day before reaching this astounding result.

In a very disappointing order in November 2020, the Missouri Supreme Court refused to review the verdict. ATRA had urged the state’s high court to review the case and (1) limit the trial court’s exercise of personal jurisdiction over a case where the defendant and many plaintiffs had little to no connection to the forum state, (2) not allow the trial court to join multiple plaintiffs in a single trial whose only commonality is alleging injury by the same product, and (3) address the constitutionality of the massive punitive dam- ages award.

ATRA also urged the U.S. Supreme Court to review the case, specifically the improper joinder of 22 plaintiffs, each with different medical backgrounds and outcomes, into one case. The Supreme Court should have reviewed this case to provide clearer guidance to lower courts regarding joining such dissimilar claims. The onus is now on the Missouri legislature to enact essential civil justice reforms to ensure the protection of defendants’ due process rights.

The ability for businesses to receive a fair trial in St. Louis may be slowly improving. In September 2021, days after a Philadelphia jury found that Johnson & Johnson’s talcum powder does not cause cancer, a St. Louis Circuit Court jury reached the same conclusion in the first multi-plaintiff talc verdict following Johnson & Johnson v. Ingham. Each of the three plaintiffs had a different condition: Susan Vogeler has clear-cell cancer, Victoria Giese has low-grade cancer, and Debra Marino had high-grade cancer. Allen Smith, who represented the women, sought $923 million in damages. The jury concluded that baby powder could not have caused all three cancer variations.

St. Louis, along with fellow Judicial Hellhole® California, is home to tens of thousands of lawsuits against Bayer AG involving its Roundup® weedkiller. All of them allege that the active ingredient, glyphosate, causes non-Hodgkin lymphoma. Law firms across the country are flocking to St. Louis to file their lawsuits. As of July 2021, California-based Singleton Law Firm had approximately 400 Roundup® cases pending in Missouri. Another prominent player is Kirkendall Dwyer LLP, a Texas-based firm.

Facing mounting lawsuits generated by a barrage of lawsuit advertising, the cost and risk of trials, and harm to its business, in June 2020, Bayer settled around 95,000 of the 125,000 claims for more than $10 billion.

In May of 2021, Judge Vince Chhabria of the U.S. District Court for the Northern District of California rejected a $2 billion class action proposal to settle future claims alleging that Roundup® causes cancer.

St. Louis Roundup® trials have been delayed due to the settlement discussions; however, all one must do is examine the trials in California to understand the plaintiffs’ lawyers’ playbook. The foundation of the litigation is a “junk science” report by the International Agency for Research on Cancer (IARC) that classified glyphosate, the active ingredient in the herbicide Roundup®, as “probably carcinogenic.” IARC is a specialized cancer agency of the World Health Organization, known to be outmoded, heavily politicized, and sub-standard in the quality of its science. The IARC report was the basis for a San Francisco jury to enter a jury award of more than $289 million against Monsanto. IARC’s classification is in stark contrast to more than 800 scientific studies as well as analyses by the U.S. Environmental Protection Agency, Health Canada, and the National Institutes of Health.

While much-needed asbestos trust transparency legislation continues to stall in the Missouri legislature, St. Louis remains a preferred jurisdiction for the plaintiffs’ bar. St. Louis once again was in the Top-10 for the most asbestos cases filed overall (5th), and the most mesothelioma (8th) and lung cancer (3rd) filings in 2020. As of April 2021, nationwide law- suits alleging exposure to asbestos caused a person’s lung cancer were up 29% compared to that time last year. By comparison, in St. Louis, lung cancer filings were up 74%. 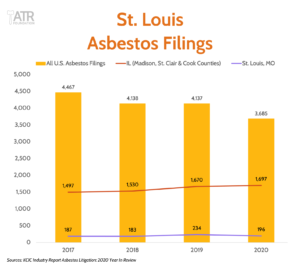 Asbestos trust transparency legislation would prevent plaintiffs’ lawyers from alleging that solvent companies are responsible for their clients’ exposure to asbestos in order to obtain compensation from trusts set up by those companies, then hiding this information when suing insolvent companies in court. Several states have enacted similar laws and it would make St. Louis a less attractive venue for plaintiffs’ lawyers.

UNCERTAINTY AROUND STANDARD FOR PUNITIVE DAMAGES IN MEDICAL LIABILITY CASES

Missouri courts have a history of handing down unreasonable punitive damage awards. On July 1, 2020, Governor Mike Parsons (R) signed into law S.B. 591, a new framework for punitive damages. Among other safeguards designed to prevent abuse, under the new law, a jury can award punitive damages upon a showing “by clear and convincing evidence that the defendant intentionally harmed the plaintiff without just cause or acted with a deliberate and flagrant disregard for the safety of others.”

Under the previous standard, Missouri courts could hit doctors with punitive damages for treatment decisions that were arguably negligent (i.e. mistakes) even though punitive damages are supposed to be reserved for egregious cases of misconduct. The case below is an example of that occurring. The legislature’s enactment of S.B. 591 responded to it and will hopefully prevent the misuse of punitive damages in the future.

In March 2021, the Missouri Supreme Court upheld a circuit court’s application of a lesser standard for the award of punitive damages in a medical malpractice case. In Rhoden v. Missouri Delta Med. Ctr., the Missouri Supreme Court ruled that “acting willfully, wantonly, or maliciously is equivalent to acting with a complete indifference to or in conscious disregard for the rights or safety of others.” The court concluded that plaintiffs made a submissible case for aggravated circumstances damages by alleging that a doctor knowingly and incorrectly informed a patient, who was not experiencing a health emergency, that his two treatment options were (1) prostate surgery or (2) self-inserting catheters for the rest of his life.

Considering the patient’s high risk for surgery, the doctor did not explore non-invasive treatment options, which constituted a complete indifference to or conscious disregard for the patient’s safety.

In his dissent, Judge Zel Fischer stated that the applicable statute, which instructs the jury to award punitive damages if the defendant demonstrated “complete indifference to or conscious disregard for the safety of others,” reflects “the general standard for the award of punitive damages. . . developed in Missouri cases between 1973 and 1976.” In 1986, the General Assembly enacted §538.210, which specifies: “An award of punitive damages against a health care provider. . . shall be made only upon a showing by a plaintiff that the health care provider demonstrated willful, wanton or malicious misconduct with respect to his actions which are found to have injured or caused or contributed to cause the damages claimed in the petition.” Judge Fischer concluded: “In my view, the General Assembly’s intent could not have been clearer: the less culpable standard of ‘complete indifference or conscious disregard’ for punitive damages no longer applied to claims against health care providers.”

The impact of this decision on future cases is uncertain, but there is hope that it will be limited following the enactment of S.B. 591, which applies to all cases filed after August 2020. This bill was enacted in response to the intermediate appellate court’s failure to recognize the change in standards.

The Missouri Legislature has taken great strides toward addressing lawsuit abuse over the past few years. It remains to be seen whether these reforms will remove the state from the Judicial Hellholes® list once and for all, but the ATRF remains hopeful and will keep a close eye on the state.

Even with the progress, there is more work to be done. In 2021, the legislature failed to pass a significant reform bill that would have addressed several problems within the state’s civil justice system. H.B.922 is legislation that originally would have reduced the statute of limitations in actions for personal injury cases from five years, which is among the longest in the country, to three years and, after being amended, included several other affirmative civil justice reform provisions. In addition to reducing the statute of limitations, H.B. 922 included helpful reforms addressing asbestos litigation, product liability, “innovator liability,” and collateral source recovery.

On July 7, 2021, Governor Mike Parson signed S.B. 51, which provides reasonable liability protections to businesses, healthcare providers, and others that are operating during an unprecedented time. The enacted legislation provides that an individual or organization cannot be held liable in a lawsuit by a person who blames them for exposure to COVID-19 unless that person can point to clear and convincing evidence of reckless or willful misconduct that caused an injury. The Missouri law also provides a presumption that a person assumes the risk of exposure if the owner of a property posts a sign warning visitors of the inherent risk. In addition, the bill provides assurance to frontline healthcare providers that are operating with short- ages of staff, equipment, and beds during the pandemic that they will not be subject to liability except in cases of reckless or willful misconduct. Businesses that have stepped up to make personal protective equipment and other products to aid the pandemic response are also subject to this higher standard in product liability actions. The Missouri law shortens Missouri’s otherwise exceptionally long five-year statute of limitations to one year for exposure lawsuits and two years for medical and product liability actions and limits punitive damages in any COVID-19 related action to nine times the amount of compensatory damages.

This legislation provides much-needed protection for frontline workers and businesses as the trial bar looks to capitalize on the pandemic. Trial lawyers in Missouri spent approximately $408,440 on 1,890 advertisements mentioning COVID-19 or coronavirus from March through December 2020.