Jurisdictions in Missouri were named Judicial Hellholes® a total of nine years, plus two years on the report’s Watch List. Recurring issues over the past 20 years include the allowance of junk science in the courts, especially in talc lawsuits, venue shopping, abusive consumer class actions, over-the-top punitive damages, and asbestos litigation.

Lawyers know this is a Judicial Hellhole  – local trial lawyer ads increased nearly 75% between 2016 and 2020, while spending on those ads increased more than 15% during the same time period. 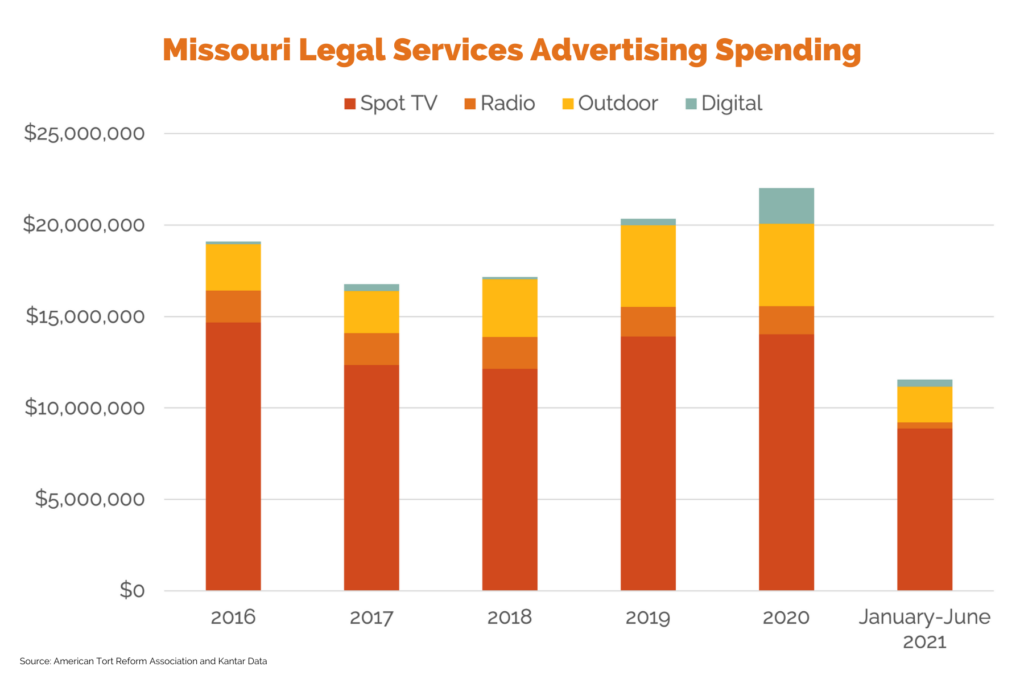 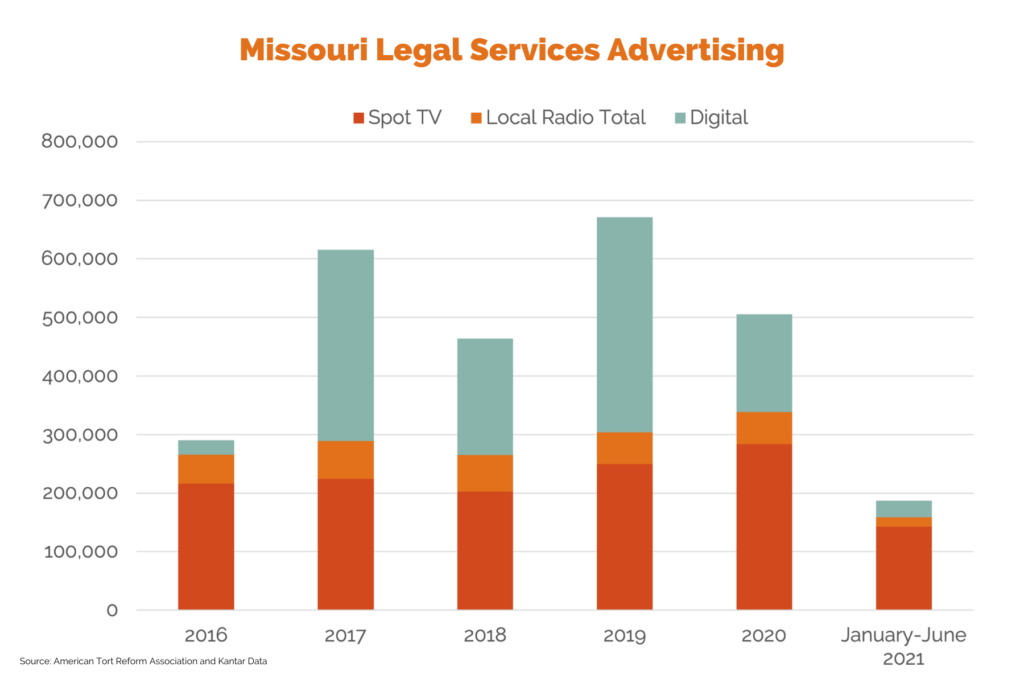 We know through research that frivolous tort cases or those that result in excessive damages and rewards can have negative consequences on the economy. These excessive tort costs are destructive to American businesses and harmful to consumers, wiping out billions of dollars of economic activity on an annual basis. A 2021 study by John Dunham & Associates found that if Missouri enacted certain tort reforms, the resulting savings to residents and businesses of the state would be more than $1.7 billion. This means that residents are in effect paying a “tort tax” of $279 per person. According to this study, the savings from reforming Missouri’s tort system could support an additional 20,880 jobs and $3.38 billion in increased economic activity.

Personal injury lawyers flock to St. Louis to file their lawsuits to take advantage of the plaintiff-friendly judges. These “out-of-state” plaintiffs clog the city’s courts, drain court resources, and drive businesses out of the state leading to job loss.

Despite the legislature enacting expert evidence reform in 2017, St. Louis judges have allowed junk science to be heard in their courtrooms. Plaintiffs’ experts, whose testimony has been determined to not be based in science by other state courts, have been permitted to testify in St. Louis courts.

Lawsuits alleging a connection between use of Johnson & Johnson’s talcum powder and ovarian cancer in women is certainly nothing new in St. Louis; however, it reached new heights (or lows) in July 2018 when a St. Louis jury awarded $550 million in actual damages and $4.14 billion in punitive damages to a group of 22 plaintiffs. The women claimed that their ovarian cancer was “caused by exposure to asbestos allegedly found in Johnson & Johnson’s baby powder.” Of the 22 women involved in the lawsuit, 17 had no connection to Missouri. Each was awarded the same amount of money, despite there being “different facts for each, and differences in relevant law.”

St. Louis, along with fellow Judicial Hellhole® California, is home to tens of thousands of lawsuits against Bayer AG involving Roundup® weedkiller. St. Louis Roundup trials have been delayed due to the settlement discussions; however, all one has to do is examine the trials in California to understand the plaintiffs’ lawyers’ playbook. The foundation of the litigation is a “junk science” report by the International Agency for Research on Cancer (IARC) that classified glyphosate, the active ingredient in the herbicide Roundup®, as “probably carcinogenic.” IARC is a specialized cancer agency of the World Health Organization, known to be outmoded, heavily politicized, and sub-standard in the quality of its science. The IARC report was the basis for a San Francisco jury to enter a jury award of more than $289 million against Monsanto. IARC’s classification is in stark contrast to more than 800 scientific studies as well as analyses by the U.S. Environmental Protection Agency, Health Canada, and the National Institutes of Health.

In May 2016 Monsanto was hit with a $46.5 million verdict in a case alleging that three plaintiffs developed non-Hodgkin lymphoma by eating foods contaminated with PCBs. The award included $17.5 million in compensatory damages and $29 million in punitive damages. The American Cancer Society recognizes that most forms of non-Hodgkin lymphoma have no known cause, and that lymphomas most often develop as people age. In fact, four earlier trials, three in California and one in St. Louis, resulted in defense verdicts.

Missouri courts also have a history of awarding unwarranted and excessive punitive damage awards, which are damages beyond compensation to an injured party that are intended to punish a defendant.

While 2020 legislation sought to reform the system by which punitive damages are awarded, it will still be up to the courts to appropriately apply the new law.

In July 2012 a divided Missouri Supreme Court struck down the state’s $350,000 limit on noneconomic damages in medical liability lawsuits. In doing so the high court’s activist majority overruled 20 years of precedent that had held limits on noneconomic damages to be “rationally related to the general goal of preserving adequate, affordable healthcare for all Missourians.” Missouri enacted the $350,000 limit on subjective damages for pain and suffering as the average award against medical care providers increased by 52% between 2001 and 2005. Especially for surgeons this represented the continuation of a deteriorating situation as the average payout on claims increased approximately 84% from 1999 to 2005.

Before the 2017 enactment of the Daubert standard for expert witness testimony, St. Louis had a reputation as a jurisdiction hospitable to asbestos claims. After Daubert was enacted, many plaintiffs’ lawyers moved their asbestos cases from Missouri to Illinois.

Lawyers know this is a Judicial Hellhole – local trial lawyer ads increased nearly 75% between 2016 and 2020. The costs of excessive litigation results in an annual tort tax of nearly $300 paid by each Missouri resident – but problems persist.

Lawyers historically abused the state’s consumer protection law, the Missouri Merchandising Practices Act (MMPA), generating shakedown class action lawsuits, alleging that product labels, advertisements, or other business practices are misleading where no reasonable consumer has been misled or lost money. They would also take advantage of a 2016 Missouri Court of Appeals decision that subjected companies to lengthy and expensive litigation, even for the most ridiculous of claims.

In 2020, Missouri adopted legislation to stem abusive consumer class actions under the Missouri Merchandising Practice Act and to curb unwarranted punitive damage awards (S.B. 591). Under this legislation, judges may dismiss a claim when no reasonable consumer would be misled by the advertising, labeling, or other practice challenged in the lawsuit, and there are defined requirements for class action proceedings. The legislation also clarifies that plaintiffs must establish that they have experienced a loss and its amount through objective evidence, including in class action litigation.

Evidence of Seatbelt Use

In 2019, Governor Parson signed S.B. 30 into law, a bill that allows a jury to consider evidence of a plaintiff’s failure to wear a seat belt when deciding who is at fault for injuries resulting from auto accidents in product liability cases.

In April 2016, after previously striking down legislated limits on noneconomic and punitive damages applied to common law claims, the Missouri Supreme Court upheld the state’s statutory limit on noneconomic damages for wrongful death claims. The ruling found that wrongful death claims are a creation of the legislature, not common law, and that lawmakers have the authority to limit damages in causes of action it creates.

Where will St. Louis fall this year?

Be the first to find out if St. Louis will continue to make the Judicial Hellholes® rankings when our 2021-2022 report comes out in December.