But plaintiffs’ lawyers have engineered two new mass tort actions they hope to turn into gold mines: prescription drug Risperdal and pelvic mesh implants (see pie chart below).  According to CLC data as summarized by the Record, there “were more Risperdal lawsuits filed in 2014 than all mass tort programs combined in 2013.”

For the record, the CLC’s record keeping has changed.  From 2005 through 2011, new filings and transferred cases were counted in the CLC’s totals; but from 2012 through to the present, only new filings are included in the mass tort count.  Earlier this year, Judge Herron’s replacement, Philadelphia Court of Common Pleas Administrative Judge Kevin Dougherty created a Xarelto mass tort docket, adding 75 transferred cases to the CLC. 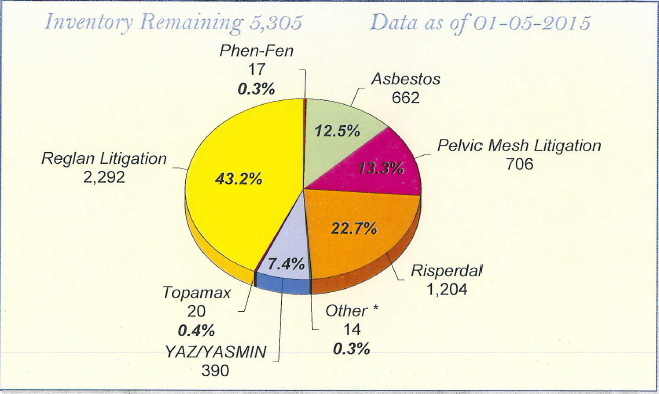