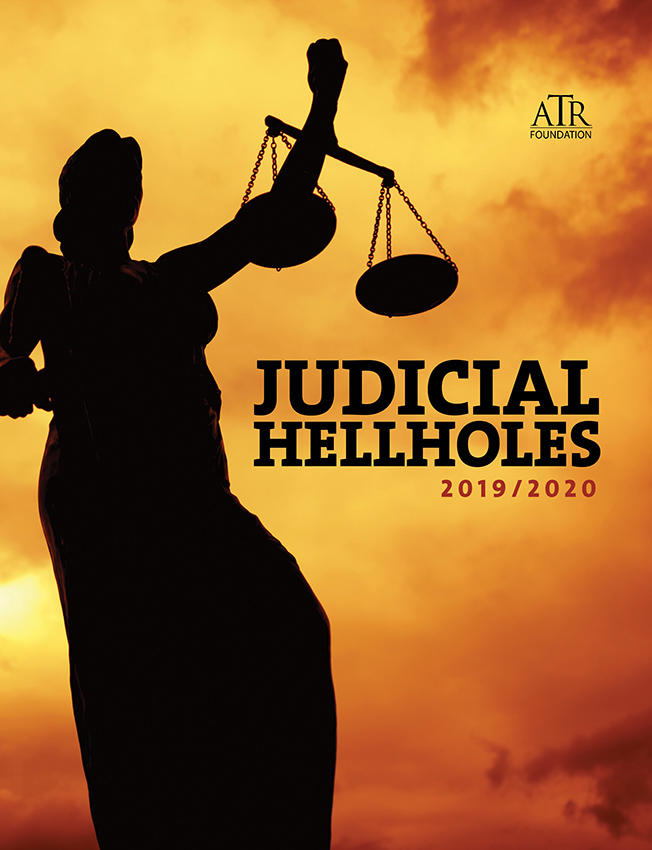 A new report highlights the worst local courts and states for abuses of the civil justice system, with the Top 10 Judicial Hellholes filled with widespread civil lawsuits, legislative loopholes that create more ways for lawyers to sue, and judges who allow junk science into evidence in trials.

The 2019-2020 Judicial Hellholes report of the American Tort Reform Foundation shines a light on the year’s abuses in the civil justice system and in state legislative bodies, lists areas on the cusp of becoming a Judicial Hellhole and identifies several troubling legal trends that are emerging.

“Justice is abused in these Judicial Hellholes, with abuses in the civil justice system hurting businesses, consumers and the nation,” said Tiger Joyce, ATRF president. “Litigation abuse drives up insurance costs and drives away jobs, and the money businesses spend fighting often-frivolous lawsuits takes dollars away from research and development of new consumer products.”

The 2019-20 Judicial Hellholes report ranks Philadelphia’s Court of Common Pleas as the No. 1 Judicial Hellhole in the country, due to the large number of mass torts cases inundating this court system and the high-dollar judgments and settlements that result. For example, in October, Johnson & Johnson was hit with an $8 billion verdict involving the medication, Risperdal, which reportedly is the largest verdict from the court in 25 years. The Philadelphia Court of Common Pleas’ Risperdal litigation has grown to nearly 7,000 cases – or approximately two-thirds of the court’s inventory. The court also has opened its door to plaintiffs from all over the country. Eight-six percent of the new pharmaceutical suits in Philadelphia are brought by out-of-state plaintiffs.

In March, Bayer and Johnson & Johnson agreed to settle more than 25,000 cases involving their jointly developed blood-thinning medication, Xarelto, for $775 million, despite an unblemished record in the courtroom. The litigation was largely divided between Philadelphia and Louisiana, another 2019-2020 Judicial Hellhole.

“What we’re seeing is that the merits of a lawsuit do not seem to matter much, if at all,” Joyce said. “The reality is the sheer volume of cases a defendant faces now drives corporate litigation strategy, with some finding it better to simply settle than fight so many cases.”

“Our hope is that this report on Judicial Hellholes will be a loud wake-up call for government officials to stop the madness,” Joyce said. “Stop creating more ways for lawyers to sue businesses, stop wasting money in court, and stop contributing to job loss.”

Excessive tort costs result in hundreds of thousands of jobs lost and billions of dollars lost in personal income each year.

“These locations are on the cusp of becoming full-blown Judicial Hellholes,” Joyce said.
“State leadership must take action and enact common-sense reforms before their economies pay the price.”