Jurisdictions in California were named Judicial Hellholes® a total of 15 years, plus four years on the report’s Watch List. Recurring issues over the past 20 years include lawsuits that abuse the Americans with Disabilities Act, consumer- and food-related lawsuits that don’t actually claim any sort of injury occurred, the enactment and enforcement of the Private Attorneys General Act (2004), lawsuits related to the state’s Proposition 65 listing of possible carcinogens and junk science, as well as the expansion of public nuisance litigation.

Lawyers know this is a Judicial Hellhole – local trial lawyer ads increased more than 115% between 2016 and 2020 while the spending on those ads increased by more than 50%. 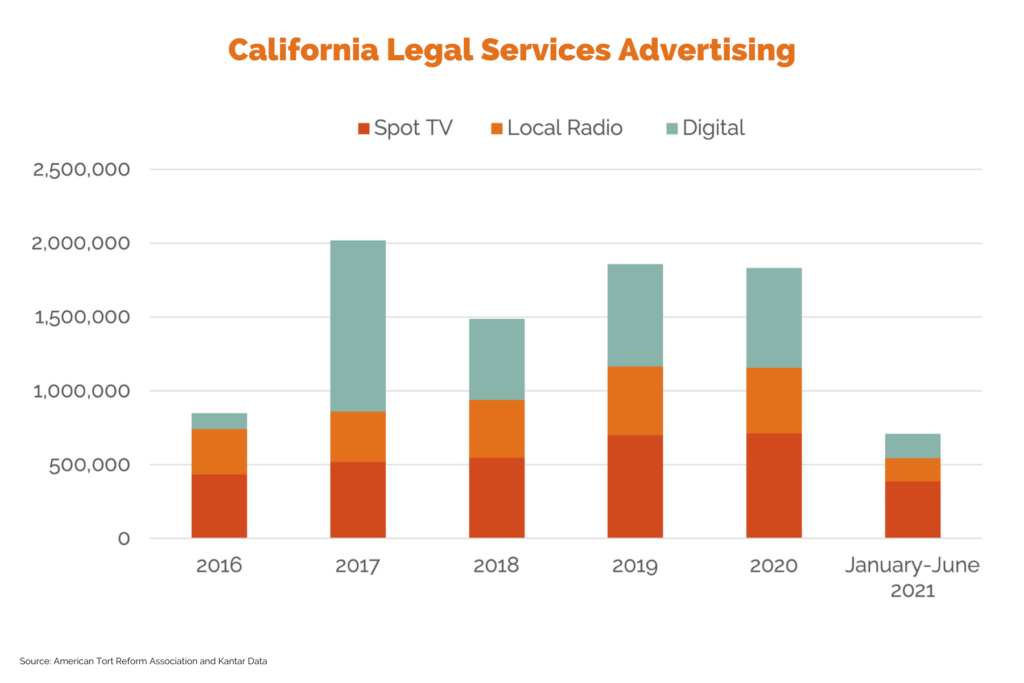 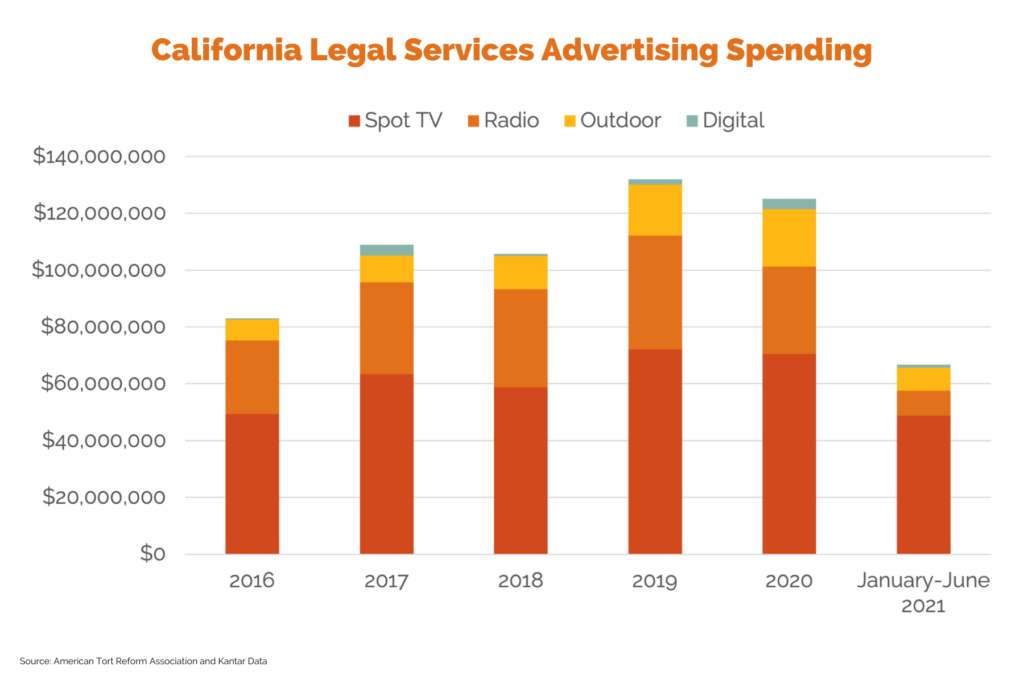 We know through research that frivolous tort cases or those that result in excessive damages and rewards can have negative consequences on the economy. These excessive tort costs are destructive to American businesses and harmful to consumers, wiping out billions of dollars of economic activity on an annual basis. A 2021 study by John Dunham & Associates found that if California enacted certain tort reforms, the resulting savings to residents and businesses of the state would be more than $22.6 billion. This means that residents are in effect paying a “tort tax” of $574 per person. According to this study, the savings from reforming California’s tort system could support an additional 206,474 jobs and $46.07 billion in increased economic activity.

Year after year, California routinely hosts the majority of federal Americans with Disabilities Act accessibility lawsuits. These are mostly lawsuits alleging that a restaurant, store, or its parking lot fails to meet any of the numerous accessibility standards.

In California, penalties for ADA violations are much higher due to the state’s Unruh Civil Rights Act, which provides for a fine of $4,000 per violation, a fine other states do not have, plus attorneys’ fees. Often these so- called “violations” are as minor as a mirror that is an inch too high or a sidewalk or parking lot that is angled one degree too much.

California competes with New York for the most “no-injury” consumer class actions targeting the food and beverage industry. These lawsuits often claim that some aspect of a product’s packaging or marketing misleads consumers, even though it is likely to have made no difference to anyone’s decision to buy a product.

Significant factors behind the state’s appeal include California’s size (makes for large classes), a plaintiff-friendly consumer law, and a perception of a plaintiff-friendly and health-conscious jury pool. Plaintiffs’ lawyers often target any food marketed as “natural.”

Businesses often settle these nuisance lawsuits because they make the understandable judgment that it makes more sense to settle the case for a few thousand dollars than spend tens or hundreds of thousands of dollars on seeking dismissal, document production, and depositions. When companies choose to fight, they often win – eventually – but at significant cost.

While California accounts for 12% of the population in the United States, its courts are home to more than 50% of all class actions. Plaintiff-friendly judges, favorable laws and the availability of high statutory damages make the state an attractive place for class action lawsuits. To make matters worse, a July 2019 California Supreme Court ruling made it easier to certify a class. The justices adopted a more lenient class certification process, finding that plaintiffs are not required to demonstrate how they will identify and notify individual class members of the litigation conducted on their behalf. The ruling is certain to attract even more consumer class actions to the Golden State. 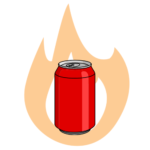 The Fake Thing? – One consumer filed a complaint against Coca-Cola, alleging its Hansen’s Natural brand sodas are not natural because they contain ascorbic acid, citric acid, and caramel color. That case, like many others, ended in a confidential individual settlement about five months after it was filed. 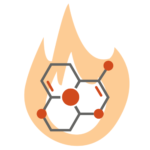 Organically Unnatural – In recent lawsuits against Ferrara Candy Co. (which makes SweeTarts), Talking Rain, (which makes Sparkling Ice beverages), and Outernational Brands (which makes Vivaloe beverages), plaintiffs claimed that the use of malic acid in foods labeled “natural” or “no artificial flavors” is misleading. Malic acid is an “organic compound made by all living organisms.” 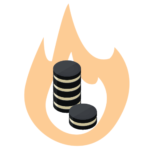 OREO You Kidding Me? – A California plaintiff has brought a class action against the maker of Oreo, alleging that its cookies aren’t made with “real” cocoa, but instead only contain mere cocoa powder. 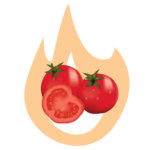 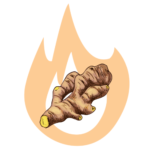 Settling for Ginger Extract – Coca-Cola Co. settled a case for $2.5 million in which the plaintiff alleged that Seagram’s ginger ale was misleading because it is not made with real ginger, but rather with ginger extracts and flavorings. Plaintiffs’ lawyers will get about $800,000 in fees and costs.

Proposition 65, the originally well-intentioned law enacted in 1986, is now one of the plaintiffs’ bar’s favorite tools to exploit. 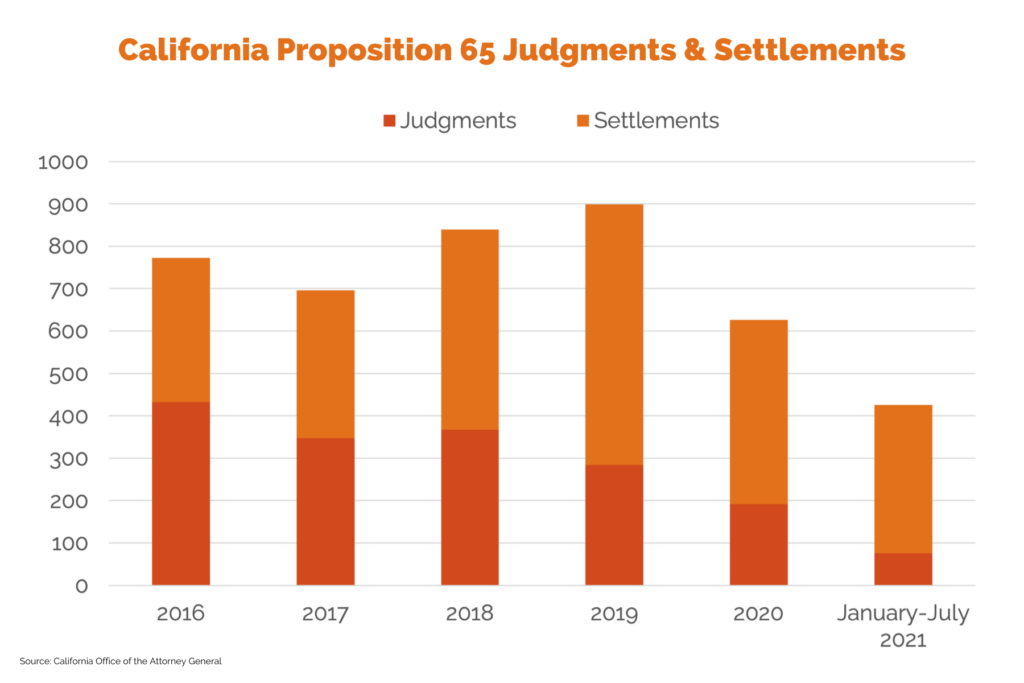 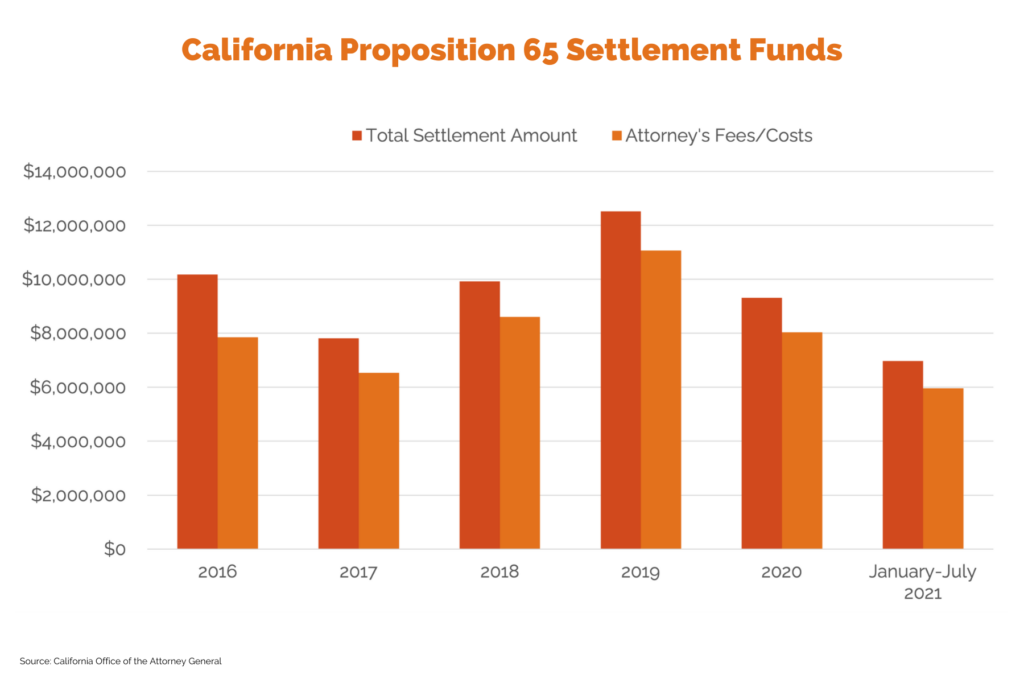 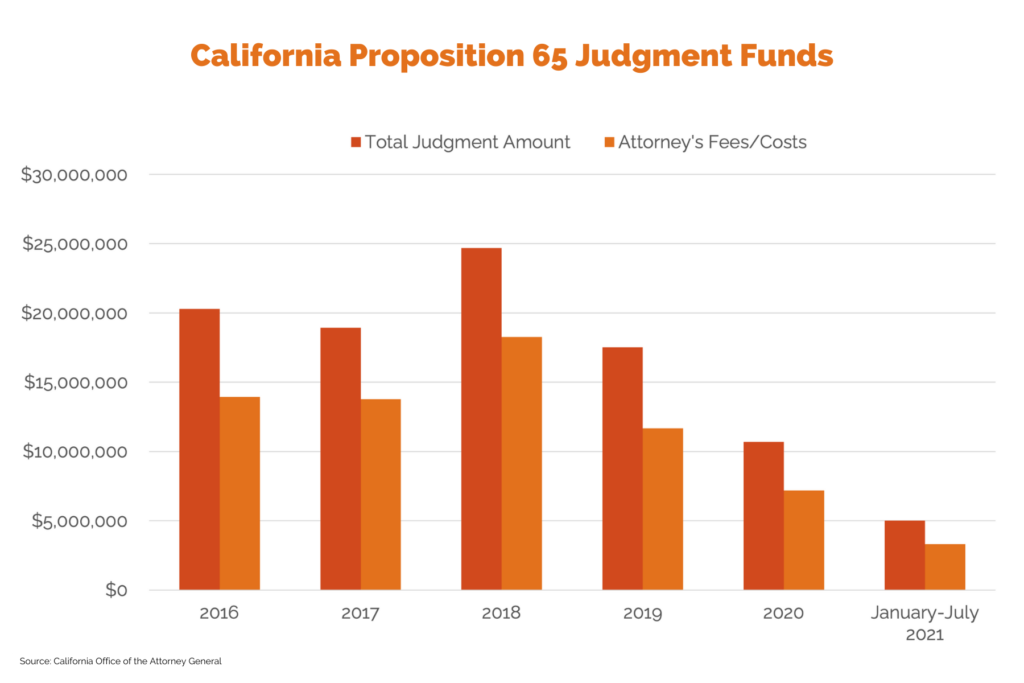 Prop-65 subjects consumers to frivolous warnings declaring that everything from brass knobs to Disneyland causes cancer.

Under Prop-65, businesses are required to place ominous warning signs on products when tests reveal the presence of even the slightest, non-threatening trace of close to 1,000 listed chemicals that state environ- mental regulators deem carcinogenic or otherwise toxic. A troublesome part of the law allows private citizens, advocacy groups and attorneys to sue on behalf of the state and collect a portion of the monetary penalties and settlements, creating an incentive for the plaintiffs’ bar to pursue these types of lawsuits. Each year, they send thousands of notices to companies threatening Prop-65 litigation and demanding a settlement. Food and beverage companies are among the prime targets.

Prop-65 also harms small businesses that do not have the in-house expertise or means to add the necessary warnings or handle litigation. Failure to comply can cost up to $2,500 per day in fines, and settlements could cost $60,000 to $80,000.

One of the most infamous Prop-65 cases involves glyphosate, the active ingredient in Roundup weedkiller. Despite essentially all regulators and scientists in the world agreeing that glyphosate is safe, including the U.S. Environmental Protection Agency, California requires companies to include cancer warnings for the product because of a single research association’s controversial study which deemed glyphosate a “probable carcinogen.”

Public nuisance lawsuits against companies that stopped making lead paint decades ago failed in seven other jurisdictions, the scheme to force those defendants to pay for the abatement of peeling and chipping paint won a key 2013 victory with help from Santa Clara Superior Court Judge James Kleinberg.

After hearing post-trial motions, Judge Kleinberg in January 2014 ordered three defendant companies to pay $1.15 billion, to be shared among Alameda, Los Angeles, Monterey, San Mateo, Santa Clara, Solano and Ventura counties, and the cities of Oakland, San Diego and San Francisco. And though it took three years, that decision was largely upheld by California’s Sixth District Appellate Court in November 2017, albeit with an order for the trial court to reduce the size of the verdict.

Local governments are trying to make energy companies pay for climate-change-related infrastructure projects, alleging that the companies’ roles in climate change have created a public nuisance. The litigation has yet to near an end, with parties disagreeing on whether the issue belongs in state or federal court.

The energy companies argue that climate change would be better handled by uniform national policy and is not a localized issue.

Recently, U.S. District Judge William Alsup dismissed a similar lawsuit filed by San Francisco and Oakland alleging that major oil and gas companies created a public nuisance and should be liable for the damages caused by the impact of climate change. In dismissing the case, the judge stated, “[t]he problem deserves a solution on a more vast scale than can be supplied by a district judge in a public nuisance case.” This decision was overturned by the 9th Circuit and the case was remanded to state court.

In 2019 the State of California joined a growing a number of government entities suing drug companies for their role in the opioid crisis. California claims that Purdue Pharma violated the state’s public nuisance laws by expanding the market for its lawful, heavily regulated, non-defective product. Other local governments in the state – including Los Angeles, Orange County, and Santa Clara County – are now suing drug makers with similar claims.

The lawsuits are based on the idea that Purdue’s marketing techniques were deceptive and misleading, despite the FDA repeatedly approving the labeling of the highly-regulated products.

While the litigation around climate change and the opioid crisis are different matters, they each intend to resolve public health and environmental crises in court rather than through the policymaking branches of government.

In September 2019, the California legislature codified the California Supreme Court’s adoption of what is known as the “ABC Test” for determining whether Adoption of the strict ABC Test was a big win for plaintiffs’ lawyers, who have been trying to expand employment law liability for years.

In 2020, however, Prop 22 carved out an exception for gig companies like Uber, Lyft, and DoorDash.

But California’s plaintiff-friendly legislature is pushing to expand employment law liability again, this time targeting the garment industry. S.B. 62 would make “brand guarantors,” those who license their brand for manufacturing, liable for labor violations that occur way down the supply chain by contractors or subcontractors that the liable company doesn’t even know about.

California’s Private Attorneys General Act (PAGA) has become a means around arbitration clauses in employment contracts that limit costly, plaintiffs’ lawyer-enriching class actions. PAGA authorized “aggrieved” employees to file lawsuits seeking civil penalties not only for themselves, but on behalf of other employees and the State for labor code violations. Most of the lawsuits revolve around technical nitpicks and don’t claim any real injury.

Under PAGA, 75% of the penalties paid by non-compliant employers go to the state’s Labor and Workforce Development Agency, while only 25% go to the “aggrieved employees,” with their lawyers taking about a third of that.

For example, in Price v. Uber Technologies (2019), a $7.75 million settlement resulted in $2.325 million for plaintiffs’ counsel and just over $1 for the average Uber driver.

In 2019, Walmart was hit with a massive PAGA judgement and was ordered to pay $102 million for “technical errors” on its pay stubs.

A September 2019 California Supreme Court ruling struck a blow to the benefits of using PAGA to circumvent arbitration agreements by allowing PAGA lawsuits to only seek civil penalties, not other damages. In reaching this result, the high court reversed an intermediate appellate court ruling that had allowed plaintiffs to recover unpaid wages through a PAGA action.

Lawyers know this is a Judicial Hellhole – spending on local trial lawyer ads increased more than 50% between 2016 and 2020. These excessive tort costs result in an annual tort tax of nearly $600 paid by each California resident – but the problem continues to worsen.

Prop 22 was approved on the ballot in November 2020 and will help bring an end to employment classification lawsuits brought against gig companies like Uber, Lyft, and Door Dash. These companies previously faced countless lawsuits over the issue of whether their drivers were employees or independent contractors, an important distinction when it comes to benefits and entitlements for the drivers. The new law declares that the drivers are independent contractors under certain conditions, a win for the app-based companies.

California has been ranked the worst Judicial Hellholes more times than any other locale.

Where will California fall this year?

Be the first to find out if California will continue to top the Judicial Hellholes® rankings when our 2021-2022 report comes out in December.