Updating the pay-to-play action that Nevada’s attorney general is running with some out-of-state plaintiffs’ lawyers, Wall Street Journal editorial writers today urged the state’s high court to put an end to it.

Judicial Hellholes readers will recall when ATRA first flagged the questionable choice by AG Catherine Cortez Masto to hire on a contingency-fee basis a Washington, D.C. law firm to handle fairly straightforward litigation by all 50 states against a mortgage-processing firm.  Why did she consider her own staff attorneys incapable of 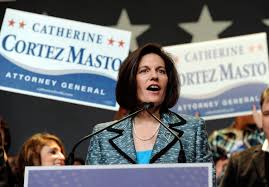 The Wall Street Journal answers that question by reporting that six partners of the D.C. firm, Cohen Milstein,  have “paid off for Ms. Masto, if not for the state. In 2010, [the] partners . . . donated to her election campaign. The firm or its lawyers have also generously funded the Democratic Attorneys General Association, including $15,000 in October 2008, $75,000 between May 2010 and July 2012, and another $10,000 in October 2012. The Democratic AGs Association has in turn contributed to Ms. Masto, including $10,000 in 2009, the year she signed up Cohen Milstein.

“Contingency-fee contracts with state AGs are one of the dirtier practices in modern politics,” the editorial continues.  “The conflict of interest is glaring, with the pecuniary interest of the private lawyers interfering with the AG’s ethical obligation to serve the public interest. But at least the damage is usually limited to a single state.”

In this case, however, AG Masto is letting her Cohen Milstein patrons hold out for a bigger piece of the pie, jeopardizing more than $125 million in settlements to which the defendant and all other states have already agreed.

Last week the Nevada Supreme Court heard arguments in a case brought by the mortgage processor that challenges AG Masto’s right to give Cohen Milstein authority over the negotiations. Under its settlement with other states, all other states can renegotiate if any single state gets a different deal. So if Nevada’s trial lawyers insist on a bigger payday for themselves, everyone will have to head back to the bargaining table.  And since all the other states are using their own staff attorneys for this litigation, taxpayers, not contingency fee lawyers, will bear the burden and risk.

Nevada law is pretty clear in precluding the attorney general and other state officials from hiring outside counsel unless the AG has a conflict of interest or the legislature passes a law authorizing it.  And though these exceptions do not apply in the case at hand, AG Masto contends she had inherent authority to contract out enforcement of state law in hopes of getting the high court to bless her pay-to-play with Cohen Milstein.  ATRA joins the WSJ in urging the court to end their racket instead.