Not everyone at NPR is reflexively anti-business.  And not all their reporting about lawsuits targeting American businesses necessarily takes the side, implicitly or explicitly, of plaintiffs’ lawyers and their clients.  But most of the public radio network’s legal reporting does, and two stories airing on the same day last week showed enough bias-by-omission to leave listeners wondering if NPR has come to stand for National Plaintiffs Radio.

In the afternoon, All Things Considered featured science desk correspondent Alison Kodjak‘s comparably lopsided piece implying that scientists are more or less evenly split on the question of whether extended talcum powder use can cause ovarian cancer. Such a causal link has been speciously alleged by plaintiffs’ lawyers in their thus far generally successful series of lawsuits in St. Louis and Los Angeles, where the day before a single plaintiff won a wildly disproportionate verdict of $417 million.

Ms. Jaffe’s nursing home story effectively embraced litigation as the preferred means for settling disputes that arise from alleged negligence on the part of nursing home staff.  Despite the fact that arbitration is much quicker and less costly by virtue of the fact that contingency fee-seeking trial lawyers aren’t part of the equation, Jaffe’s report suggested without evidence that arbitration was somehow unfair to those who allege injuries.

Though her report noted studies showing that awards to complainants in arbitration can be as much as 35% lower than awards in lawsuits, Ms. Jaffe failed to note the obvious: namely that a contingency-fee lawyer’s cut from any settlement or verdict generally averages about the same 35%.  She also failed to mention that present and future federal taxpayers, primarily through the Medicaid system, are fated to pick up a steadily growing tab for aging baby boomers’ nursing home care.  And she said nothing of the fact that all litigation costs are eventually passed on to everyone in the form of higher prices.

Maybe most NPR listeners are, as Ms. Jaffe’s reporting seems to assume, unconcerned about Medicaid’s fiscal future and supportive of costly lawsuits that tend to enrich wealthy personal injury lawyers at the expense of taxpayers and families seeking affordable, nearby nursing home care for their loved ones.  But listeners should have been told the whole story so they could better make up their own minds about arbitration and litigation.

In a similar withholding of material evidence, Ms. Kodjak’s talc litigation story made no mention whatsoever of the fact that plaintiffs’ lawyers have purposefully brought their talc suits in states that apply a less exacting standard for the admittance of expert evidence than that which is applied in all federal courts and roughly 80% of other state court systems (see this recent ATRA news release for more on evidentiary standards).

Neither did Ms. Kodjak discuss the tens of millions of dollars personal injury law firms have invested in targeted local television advertising that trashes talc defendants and their products with misleading claims.  Ostensibly packaged as client solicitations, the ubiquitous ads more practically function as a means to influence potential jurors.  To wit, talc defendants filed a well-documented motion last year seeking to have a trial moved “outside the St. Louis media market and at least 100 miles away, in order to minimize the jury taint” from such ads.

But perhaps most important was Ms. Kodjak’s unwillingness to report plainly that no leading cancer research institutions or government regulatory agencies in North America or Europe have found a causal link between talc use and ovarian cancer.  She also left out of her story the fact that, even in plaintiff-friendly New Jersey, a judge last year dismissed two talc cases, saying of the same two plaintiffs’ experts allowed to testify in Missouri and California, “[t]hough both . . . are eminently qualified, their areas of scientific inquiry, reasoning and methodology are slanted away from objective science and towards advocacy.”

In fairness to NPR, when lawsuits target businesses owned by minorities or recent immigrants, its reporters can be more evenhanded and 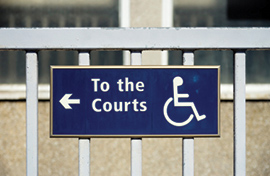 even critical of the sometimes conniving and self-interested lawyers driving the litigation.  Such was the case in April 2014 when reporter Nathan Rott detailed a then-growing wave of disability-access lawsuits in California brought under both the federal Americans with Disabilities Act and state civil rights law.  This shameless shakedown litigation had less to do with access for the disabled than it did with extorting English-as-second-language speakers inclined to settle out of court, and NPR deserves credit for covering it.

Nonetheless, NPR remains broadly inclined to favor plaintiffs and disfavor business defendants in its coverage of civil litigation. And if its listeners and funders aren’t already aware of this steady bias, they should be.